Learn everything about the African lion

“Lion: the fiercest and most magnanimous of the four-footed beasts“

Welcome to our comprehensive guide to the African lion.

Let’s start our journey of discovery with Etymology, where did the lion get its name?

The lion’s name derives from the Latin Leo; the ancient Greek λέων (Leon) with the Hebrew word lavi possibly also related. The generic component of its scientific designation, Panthera¸ is presumed to derive from Greek pan– (“all”) and the (“beast”) but this may be a folk etymology. The name came into English through the classical languages, but panther is probably of East Asian origin meaning “the yellowish animal”.

The lion was first classified as Felis Leo by Linnaeus in 1758 from a specimen found in Constantine, Algeria

The lion (Panthera leo) is a mammal and second largest in the family Felidae, being slightly smaller than the tiger (Panthera tigris). The leopard (Panthera pardus) and the jaguar (Panthera onca) are the two other cats that make up the four “big cats” in the genus Panthera. 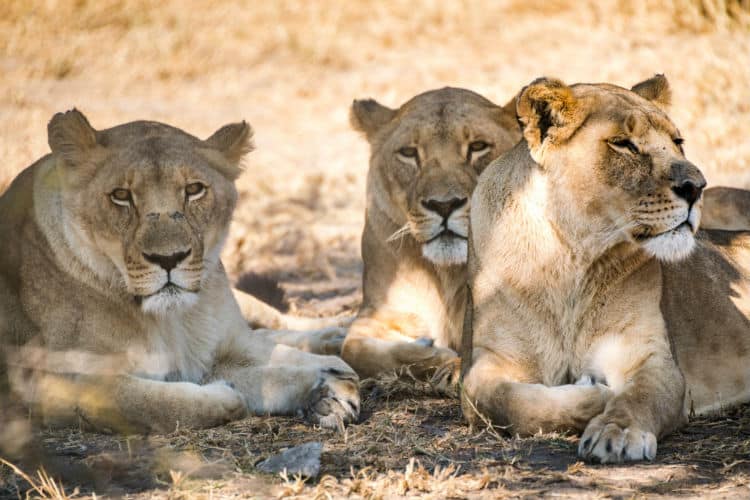 Origin of a Species

Fossil evidence suggests that the earliest lion-like cat (P. l. fossilis) appeared at Laetoli in Tanzania in East Africa during the Late Pliocene (5.0–1.8 million years ago).

In a pattern broadly resembling that of humans, lions migrated out of Africa during the Middle Pleistocene (800–100,000 years ago – kyr) into Europe, Asia and North America extending as far south as Peru and becoming the most widespread large terrestrial mammals during the Late Pleistocene (100–10 kyr).

Recent genetic studies have suggested that at least two distinct lineages of lion inhabited western Eurasia at the end of the Pleistocene: the Holarctic cave lion (P. l. spelaea), and the modern lion (P .l. leo).

It has been suggested that a population bottleneck of the modern lion (ca. 55–200 kyr) allowed a single population of lions to replace older populations in Africa and south-western Eurasia.

This single origin replacement model of modern lion evolution provides a parallel to the ‘recent African origin’ model of human evolution (in comparison to the ‘multiregional evolution’ model), in which modern Homo sapiens evolved in Africa ca. 200 kyr and went on to replace hominids (e.g. the Neanderthals) elsewhere.

Facts about the African Lion

Where do African lions live?

Read more on our blog

Lions have tawny, or yellowish-brown, fur. They grow to a length of about 10 feet (3 meters) and stand about 4 feet (1.2 meters) tall. Male lions are larger than the lionesses (females), weighing as much as five men or about 550 pounds (250 kilograms).

Why is lion called king of the jungle?

What is a female lion called?

A female lion is called a lioness. Lionesses do most of the hunting for their pride. They are more effective hunters, as they are smaller, swifter, and more agile than the males and unencumbered by the heavy and conspicuous mane, which causes overheating during exertion.

Do lionesses eat their cubs?

Wild male lions will also typically chase off any male cubs when they grow up to ensure they are alone with the pride lionesses. Sometimes the lions will kill cubs – usually when they take over new territory from another pride – to stake their claim on the females.

How old do lions get?

Lifespan: In the wild, the lifespan of lions is approximately 15 years, however in captivity, it can be as long as 30 years.

Breeding: Lions reach sexual maturity at 2 years old and mate at all times of the year.

Do lions kill other lions?

When male lions take over a new territory, they almost always kill the prides’ cubs, since they are not biologically related and do not want to spend energy ensuring that other lions‘ genes will be passed on.

How would you describe a lion?

Lions have strong, compact bodies and powerful forelegs, teeth and jaws for pulling down and killing prey. Their coats are yellow-gold, and adult males have shaggy manes that range in colour from blond to reddish-brown to black.

Latest Blogs about the African Lion

Lions are carnivores, this means they like meat They eat many different kinds of animals, known as...

Physiology of the African Lion Body Size & Weight Lions are unusual amongst cats in displaying... 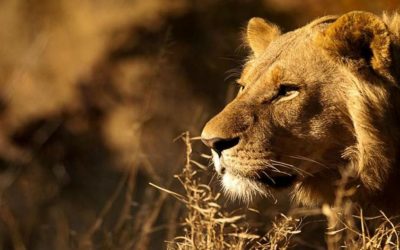 Lions in Religion The oldest known animal-shaped sculpture ever found is a half-human half-lion,... 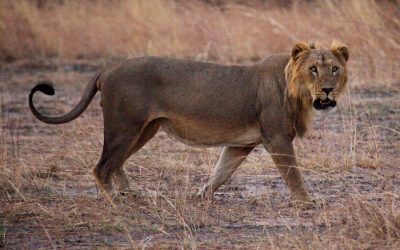 The Ecology of the African Lion Lion populations differ ecologically, even within an eco-system....

View all updates on the African lion by ALERT

Due to their social nature, lions have one of the most complex communication behaviours of any of the cats. Lions make a variety of calls, each with a grading of volume, intensity, tempo and tone including roars, grunts, moans, growls, snarls, meows, purrs, hums, puffs and woofs. 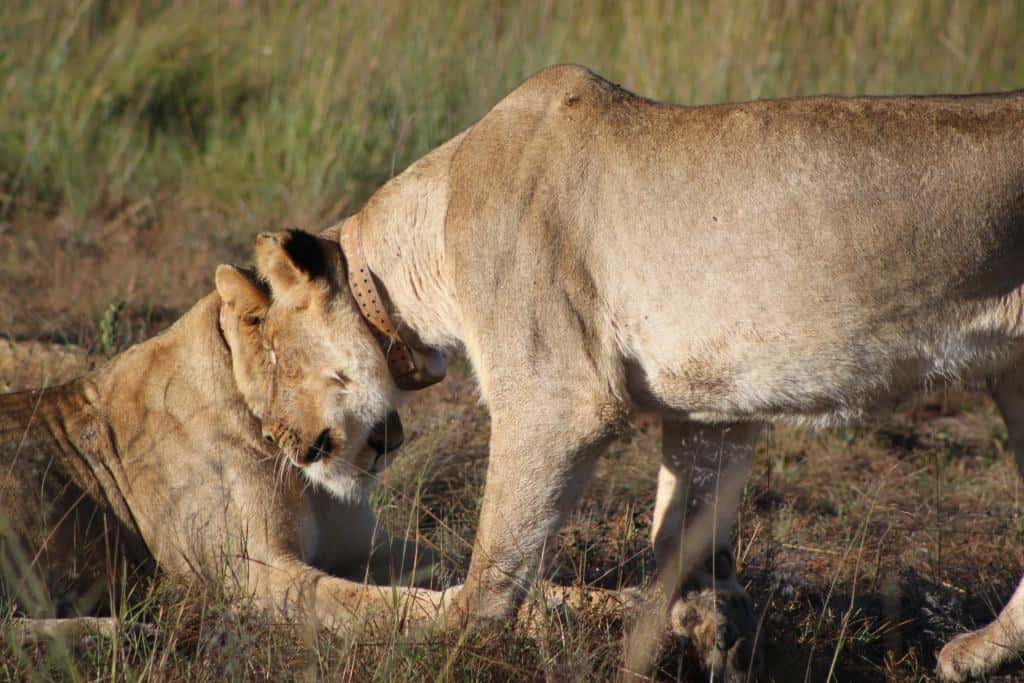 Lions roar for a number of reasons; advertising territorial ownership, intimidation of rivals, locating pride members and strengthening social bonds. Roaring is most commonly done when the lions are most active, and as such can be heard mostly at night, especially just before dawn.

The greeting ceremony is performed whenever lions meet to reaffirm social ties and confirm pride membership. It begins with the two lions approaching each other, often moaning softly and licking their lips, before rubbing their heads together, and moving on to rubbing each other’s sides, usually with the tail held high or draped over the other lion. Greeting lions often rub against each other so hard that one may be pushed over.

How do lions hunt?

With relatively small hearts and lungs, lions are not fast runners; a maximum speed of 60kph, nor do they have the stamina to keep this pace for more than a 100 – 200m.  As such, lions rely on stalking their prey and rarely charge until they are within 30m unless the prey is facing away and cannot see the charge.

Lions stalk their prey and although ambush behaviour has been observed, this happens mainly during daylight when stalking prey is more difficult.  Of 1,300 hunts observed in the Serengeti, 48% involved only one lion, 20% involved two, and the remainder involved a group of three – eight (up to 14).

Read the full article about the lions predatory behaviour

Due to the nature of a large number of females in prides, males are able to dominate breeding, which has led to fierce competition between males.

Males are forced to leave the pride they were birthed into between the ages of two-three years and enter a nomadic phase until they are large enough to challenge a sitting dominant male for control of a pride, at around five-six years old. Brothers will usually stay together and form a coalition, oftentimes joined by males ousted from other prides.

In the Serengeti population, 42% of coalitions were formed with at least one unrelated male.

The apparent benefits to winning and sustaining the dominance of pride through increased strength awarded by a coalition are clear, however, studies have shown that most coalitions are small, and many males stay as lone nomads. Out of 40 sightings of nomadic males in the Serengeti, all but three were pairs and singles. Coalitions up to seven-strong have been recorded.

Most pride tenures last around two years, however collations of three or four males often last longer. Coalitions of more than four males are rare as these coalitions often take over more females than they can defend, resulting in fewer surviving offspring. 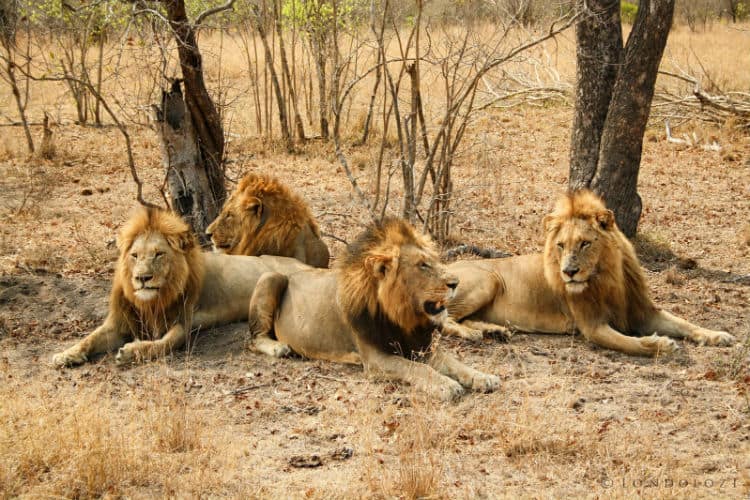 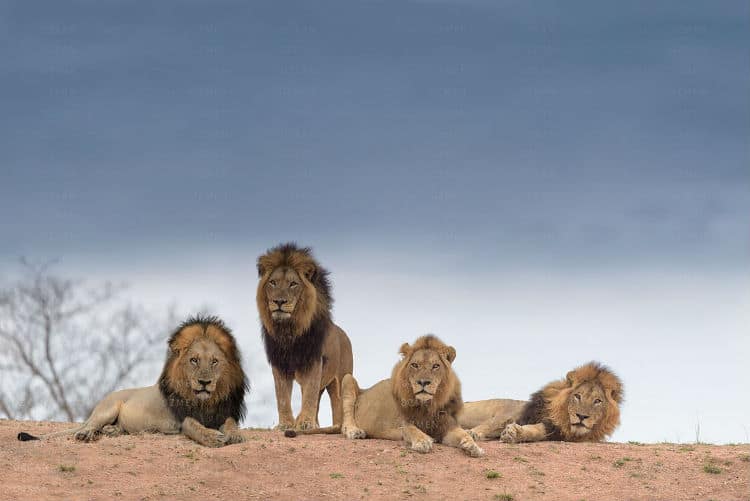 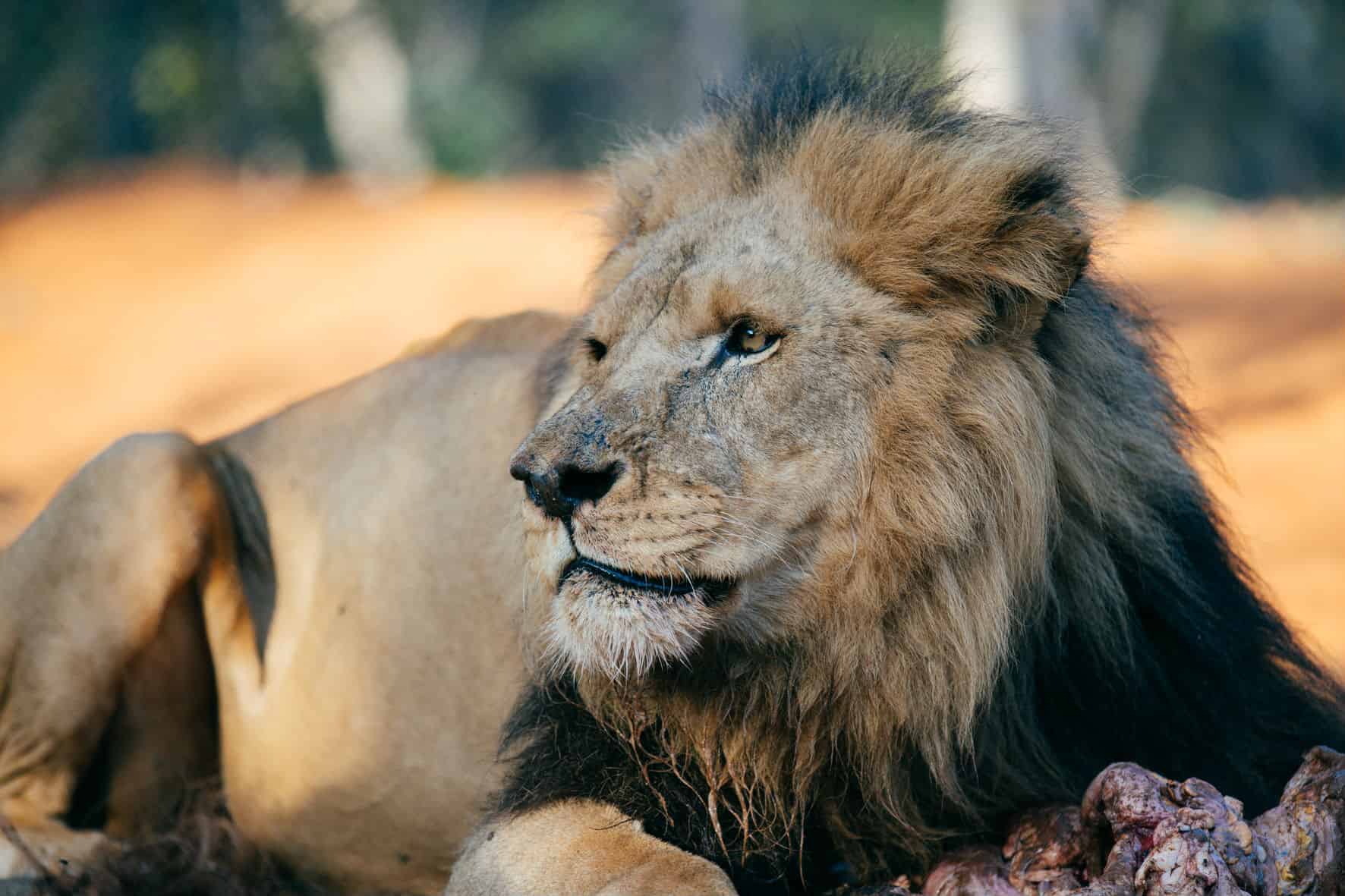 Imagine Africa without the mighty lion. It’s a kingdom without a king. Nothing would be more devastating to this continent than losing this iconic majestic animal. 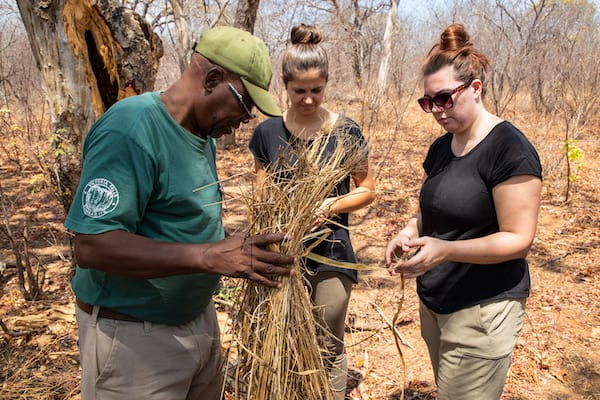 Wildlife conservation and community development go hand in hand.  There’s no way of saving African wildlife, without getting the local communities involved. 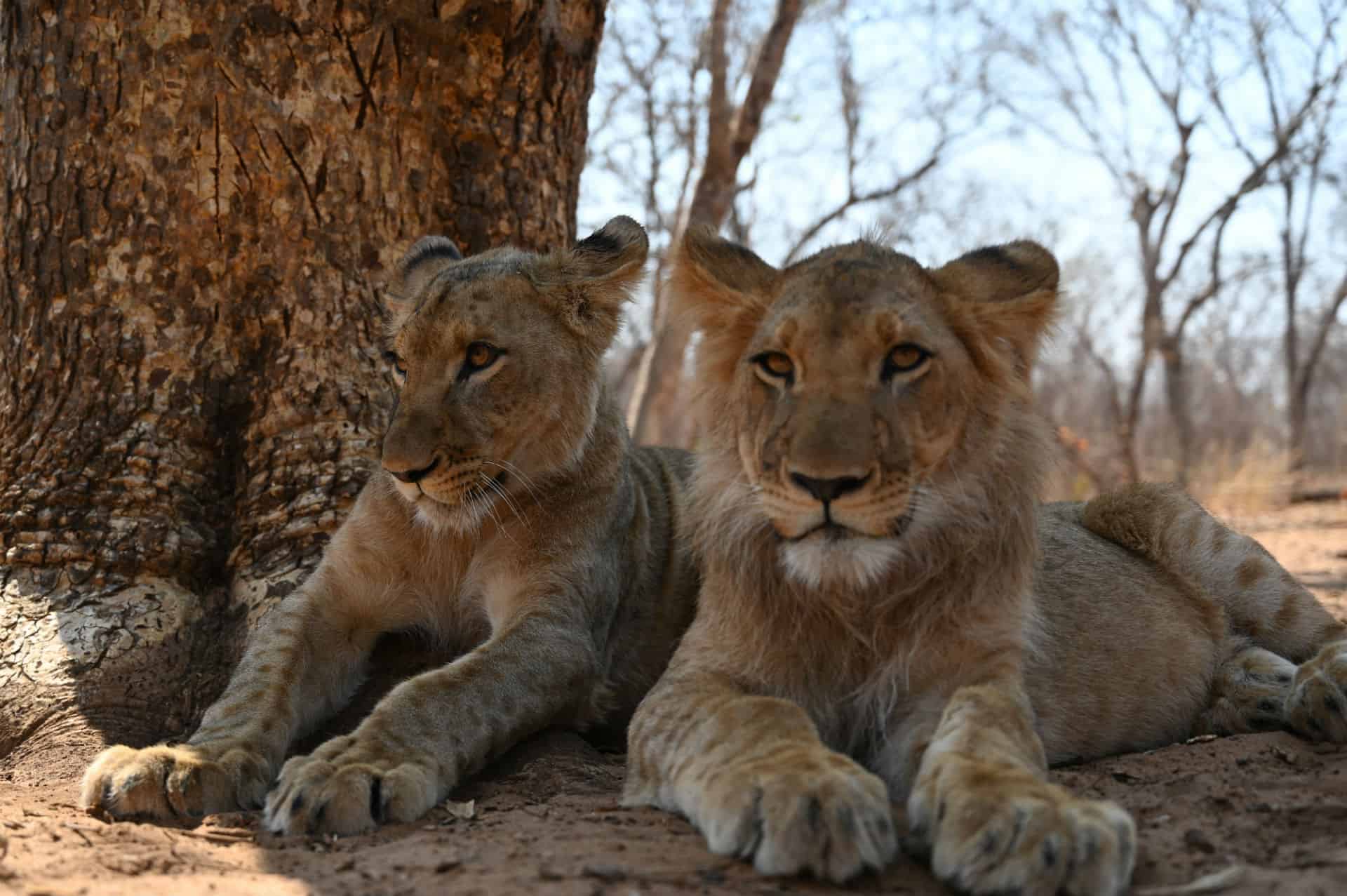 What is Africa without the iconic African Lion? What sound would resonate through the African night? Who would be king? Africa would simply not be Africa without its king.

Facts about lions for kids

The African lion is known as the King of Beasts.  Its scientific name is Panthera leo.  Lions belong to the big cat family – lions, tigers, leopards and jaguars – and are the second largest big cat in the world after the tiger.

Male lions usually live for between 10 to 12 years in the wild, but females can live up to the age of 14 or 15.  In captivity, lions have been known to live for 20 to 25 years.  This is because they are kept in a cage or an enclosure and don’t face any of the dangers that wild lions do. 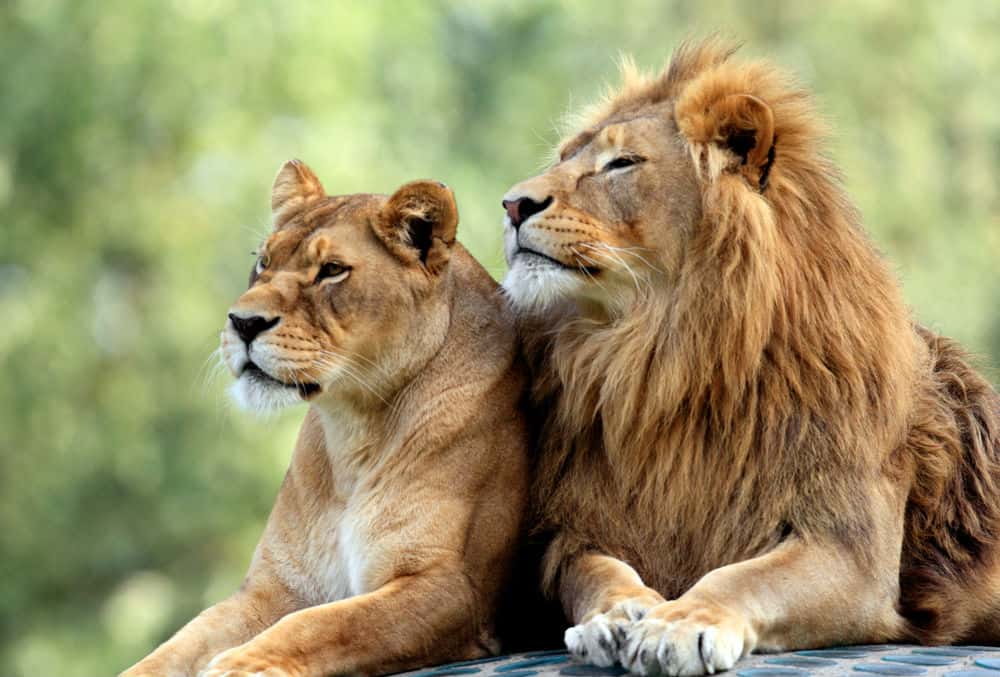 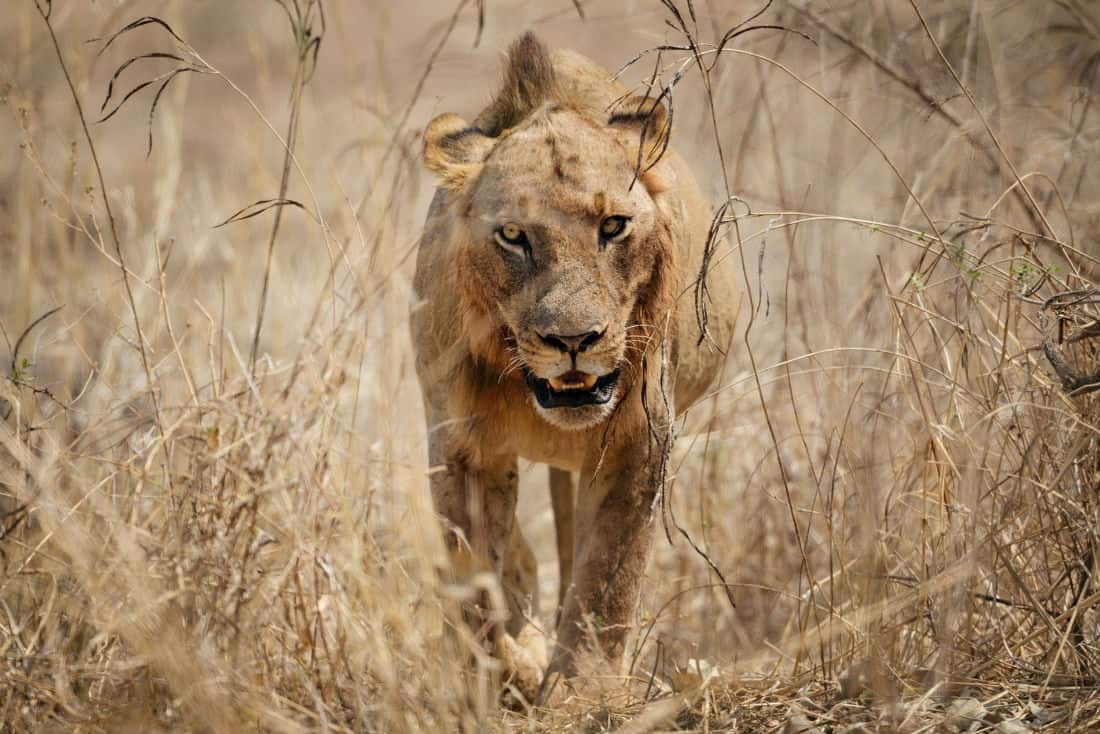 Diseases can be classified as endemic or epidemic dependant on their persistence in a population. Although lion populations can be affected by high mortality over brief periods caused by epidemic viruses, endemic viruses can be constantly prevalent and are thought to exhibit low pathogenicity.

Epidemic disease risks for animals living in fragmented small populations become significantly higher as contact with human and domestic animal populations become more frequent and as a result of alterations in microclimate and landscape ecology. The tools to predict, prevent and respond to these risks are not well established in conservation management.