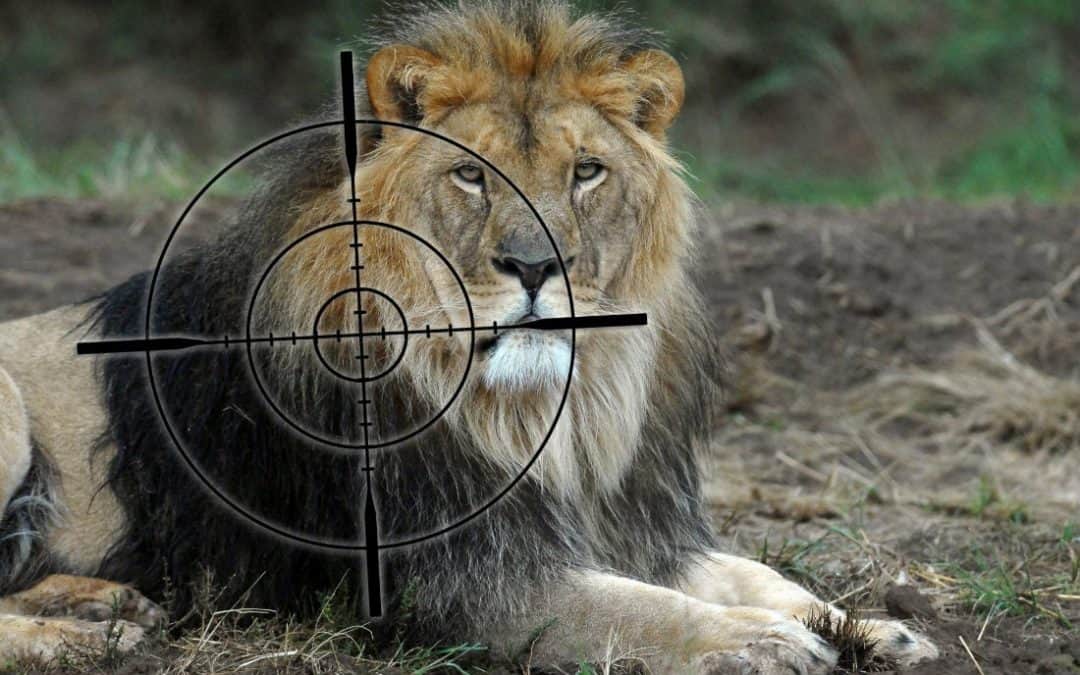 The concept of “canned hunting” of animals like lions has recently come under a microscope dialled to the optical level of “extensive scrutiny”.

From Wikipedia, the free encyclopedia. A canned hunt is a trophy hunt which is not “fair chase”; it has been made too easy for the hunter. In some examples, animals have been kept in a confined area, such as in a fenced-in area, increasing the likelihood of the hunter obtaining a kill.

In a nutshell, the concept of “canned hunting” of lions means that the “trophy” shot by the hunter has been raised through a captive breeding program. There are many of these in South Africa, for example, where breeding populations of lions are kept in enclosures, and their offspring offered to sale for “hunters” who arrive at the game ranch/breeding facility.

Please select your trophy from our menu…cubs are often kept in appalling conditions whilst they wait to be old enough to be selected to be shot.

The hunters get taken to a pre-arranged area where the captive bred lion has been conveniently installed; often times drugged and baited, where they level their high-powered rifles, and take home their wall-hanging, eventually artfully rendered by a taxidermist.

Secondary “canned hunting” schemes have been devised by clever operators who lure wild lions from protected areas into their hunting concessions by providing carcasses and playing calls over loudspeakers to attract them over the boundary.

This secondary activity should be identified for the criminal act it is, and perpetrators prosecuted.

But basically, the “canned hunting” operators working from captive bred animals are providing a desired product for the national (in this case, let’s say South African) and international markets. This needs to be accepted as a fact. Whether the eventual trophy room is located in Spain, Germany, Hong Kong, Johannesburg, or Houston, and whether the contact with the client is by internet or phone or by word of mouth or by international hunting meetings held yearly in Las Vegas, the demand for lion trophies is there.

How much do you have to pay for that trophy on your wall? Well, let’s say you wanted to hunt a wild male lion in Botswana. Probably you would have to debit your bank account for well over $150,000 before you could proudly introduce friends to your latest wall decoration. Of course, if you shopped around, maybe attended auctions by hunting companies, and did not mind travelling to African destinations identified with civil strife, corrupt wildlife departments & politicians, your trophy lion could be hanging there for a bit less.

But your best bet in terms of economy remains the “canned lion”.

Captive-bred, staked out, you are taken there by vehicle, you are back at your camp for lunch, and the stories about the trophy on the wall are yours to invent and embellish. In terms of skill, prowess, proficiency and expertise on the part of the hunter, this probably ranks right up there with shooting fish in a barrel or a cow in a field.

Canned lion hunts have been revealed, regaled, and reviled on television and in print.  The practise of “canned hunting” of lions came under recent review in South Africa – the former Minister of Environment took a bit of a stance against it, the breeders complained, it went to court. The initial case was upheld by the courts but was subsequently overturned by a court of appeals. So the practice will continue for now, perhaps with a few, a very few, controls.

There are powerful lobbies at work there, and pragmatists know that ethical principles usually bow to commerce.

Controversial as the activity is in terms of public opinion, there are aspects of canned lion hunting that are defensible. First, these animals are actually the property of the breeder, as much so as the impalas, kudu, wildebeest and blesbok on the game ranch. There are probably over 10,000 game ranches in South Africa alone, established to provide wildlife trophies and game meat for a hungry demand by consumers. Restaurants and upscale supermarkets as far away as London and Copenhagen serve meat from African species. Crocodile and ostrich farms sell meat and skins on the national and international markets.

Game ranching and game farming is a well-established business all over the world (you can buy kangaroo and American buffalo (bison) meat as well), so given that all these animals are raised in captivity for the sole purpose of their eventual demise (like cows, pigs, chinchillas, minks, foxes, chickens, ducks, geese, salmon etc involved in more traditional farming), can we actually say that a captive-raised lion destined for an eventual demise is any different philosophically from a lamb led to slaughter?

Continuing to play Devil’s Advocate, is it not better to equip the trophy rooms of the world with whole mounts, skins, and glass-eyed heads of lions bred in captivity rather than “collecting” them from the ever-diminishing wild populations? From 100,000 lions in the wild in the 1960s, we are now left with perhaps 20,000 on the entire continent. You could put the entire African wild lion population into a single stadium where people come to watch the Yankees, Manchester United, or the Dallas Cowboys.  Oh, and there would still be plenty of empty seats – many Kenyan and Nigerian lions who booked their tickets a few years ago, for example, are no longer able to attend as they are now dead.

I decided to do a bit of further research on the subject. CITES, the international regulatory organization that is “supposed” to regulate international trade in endangered (and vulnerable) species by issuing permits for export and then tracking where those exports go, has provided figures that make up this next graph of exported trophies from wild lions shot as trophies in South Africa versus “canned” lions.

Unfortunately, published numbers are only available until 2005. The CITES record keepers need a wakeup call maybe? Anyway, you will see that “canned” lion hunting trophy exports started in 1994 (year 12 on the graph), and have gained in popularity since. This is probably because “canned” lions are made available to the trophy hunter at a much-reduced cost compared to the expense involved in embarking on a wild lion hunt. A “canned” lion, if you are a canny hunter, can probably be supplied for roughly $20,000 versus a wild lion costing at least three or four times that. Of course, a female lion goes for a real bargain price, you are forbidden to shoot a wild one these days. 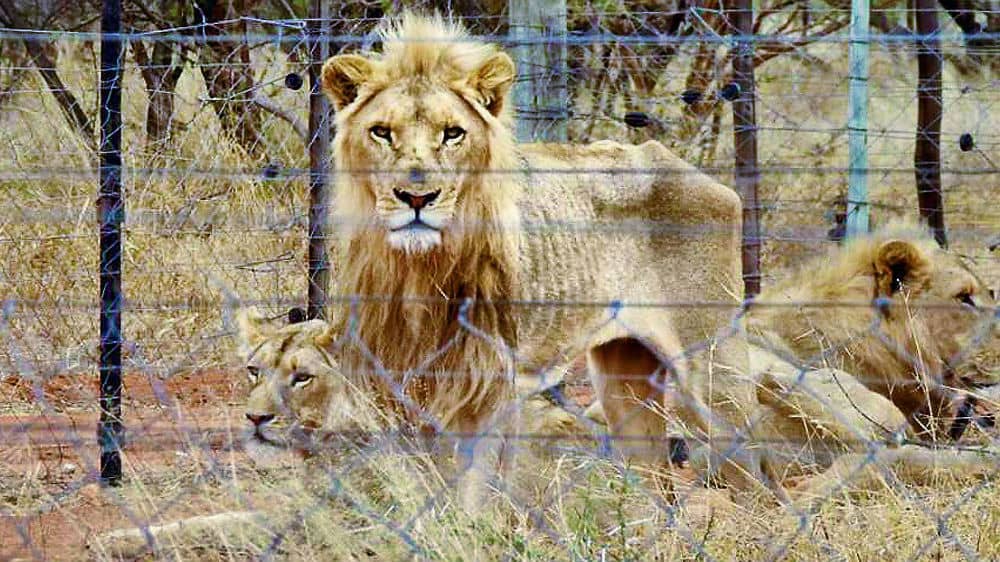 So what can we extract from this?

I have a few choice conclusions, maybe you could add more:

So what can we do about this? Well, the first thing is to publish and disseminate this information. If the US bans canned hunting at home, they should do so abroad as well. I suppose that if you come home with a “canned” lion trophy and then get locked up for a year, it might just deter a few US hunters – maybe. The European Union is lagging behind in any kind of “canned” hunting import legislation. While the South African court’s hem and haw, import regulations would render their strangely inappropriate deliberations meaningless.

Conservation of lions in the wild is a very difficult issue. Overall, lions are declining in the wild due to loss of habitat, conflict with humans and livestock, diseases, and trophy hunting pressure. David Youldon and I estimate there are possibly only 6 populations that can be considered “long-term viable”. These are the populations with over 1000 lions still remaining in places like Tanzania, Botswana, and Kruger Park in South Africa. So from 20,000 lions added together on the continent, we are now down to a handful of populations that might actually ensure the survival of the species.

ALERT is not advocating the practice of “canned lion” hunting, but at the same time, we would like to see trophy hunting of all wild lions stopped. You simply cannot justify continued hunting of a species that has declined by more than 80% in the past fifty years by invoking benefits to local communities and by mentioning that areas leased to hunters increase the scope of habitat available to wildlife beyond that available in protected areas.  We would like to see a situation where African nations clearly designate areas where they are committed to conserving lions and then to put in place nationally relevant programs to protect the species.

In the hunting industry, morals and ethics in terms of hunting wild lions have long gone out the window.   We are sure that there are many ethical hunters that would like to see their activities contribute overall to the conservation of the species in their sights.  But for every one of those, there are many more who don’t give a damn, and the African professional hunting industry apparently cannot or will not reject their lucre.

So how strongly do we want to oppose the moral and ethical issues of “canned” lion hunting versus those of shooting lions in the wild?  Consider that!.

And in the meantime, if you are fortunate enough to see a wild lion on your safari, remember that this magnificent animal is probably living on borrowed time unless all of us consider informed options and come up with relevant solutions