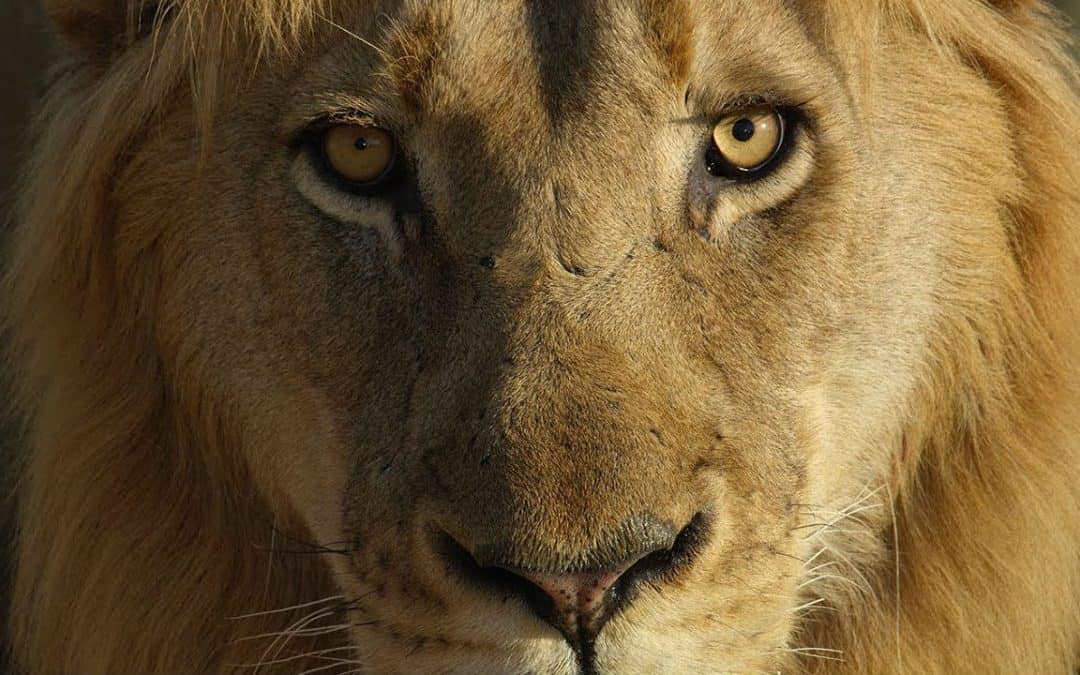 Learn about the African Lion

Lions are part of the cat family and are similar to pet cats in more ways than you would imagine.  At the same time, we must never forget that they are the King of Beasts; fierce, strong and majestic. 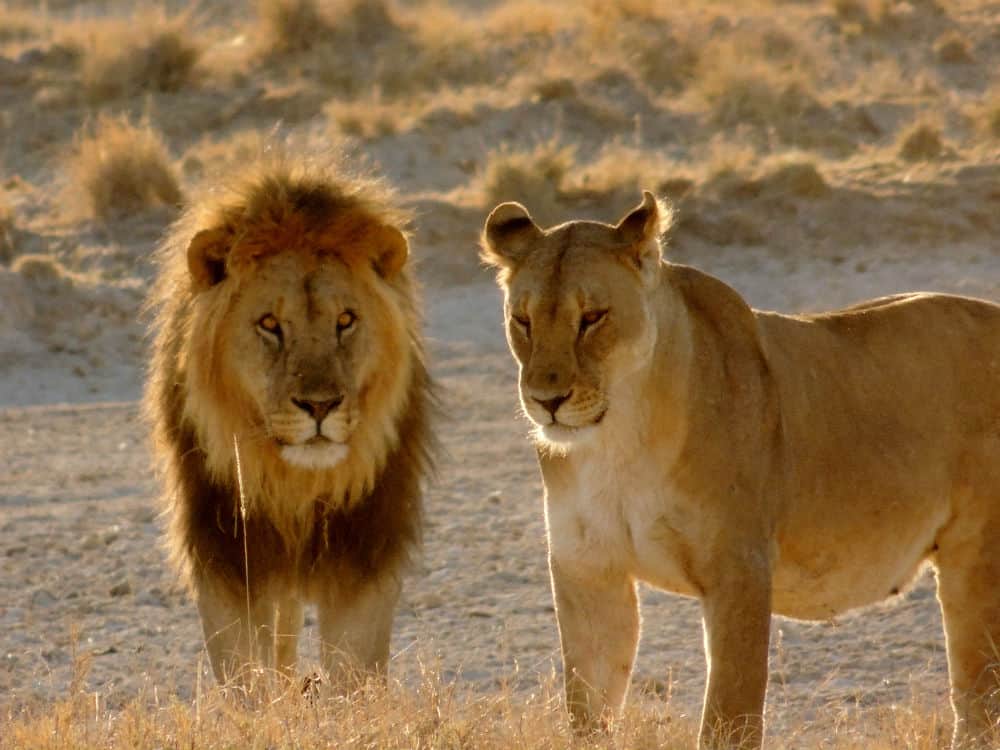 Like many other animals, male lions are much larger and heavier than females.  The heaviest male lion recorded was spotted in Kenya and was 272 kilograms.

Much smaller in comparison, the heaviest female, found in South Africa, was 152 kilograms.  That is still heavier than the weight of more than 50 female pet cats put together! 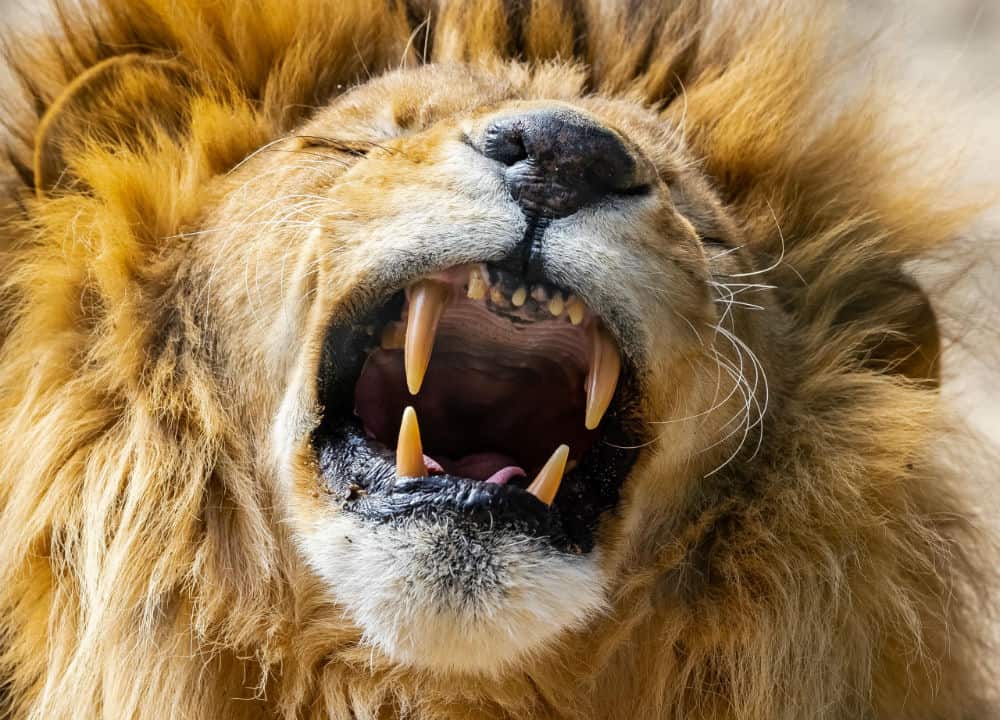 Lions have three types of teeth:

Lions can open their jaws to up 28 centimetres wide, giving them one of the animal kingdom’s biggest bites! 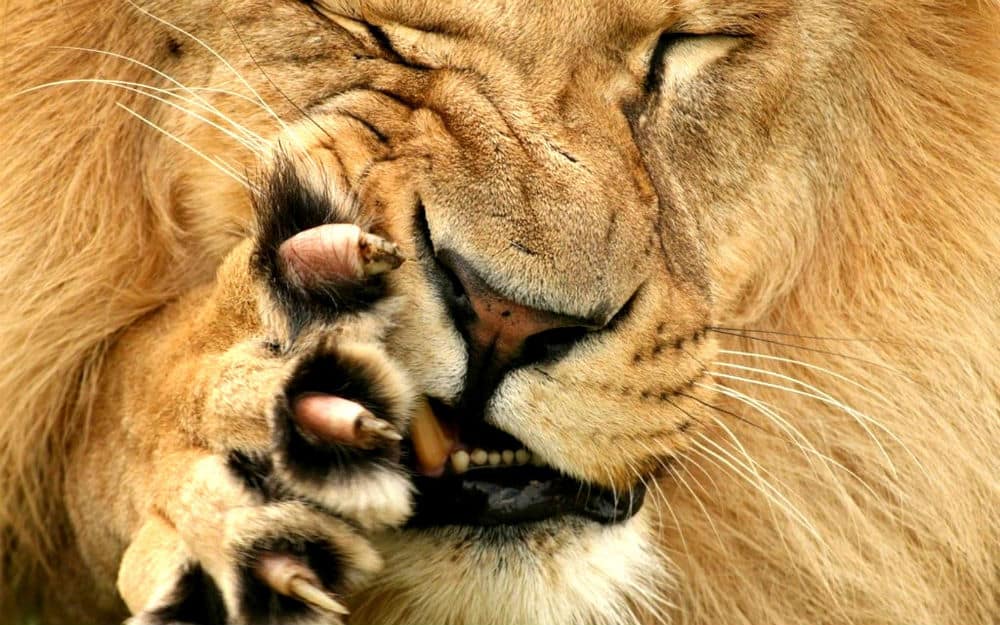 A lion’s paws are very similar to a pet cat’s but much, much bigger.  They have five toes on the front paws and four on the back.  Measurements taken from a lion’s paw print can help us guess how old it is and also if it is a male or female.

Also like a pet cat, lions have retractable claws.  This means that their sharp claws can be stretched out and then drawn back inside again under the fur where they are hidden.  They can grow up to 38 millimetres in length and are very strong and sharp.  A fifth toe on the front paw has what is called a dewclaw, which acts like a thumb for holding down prey when eating.

The claws are made of keratin, which is the same substance as our fingernails and toenails.  They consist of lots of layers, which eventually break off to reveal an even sharper claw underneath.  Lions sharpen their claws by scratching trees to keep them extra pointy. 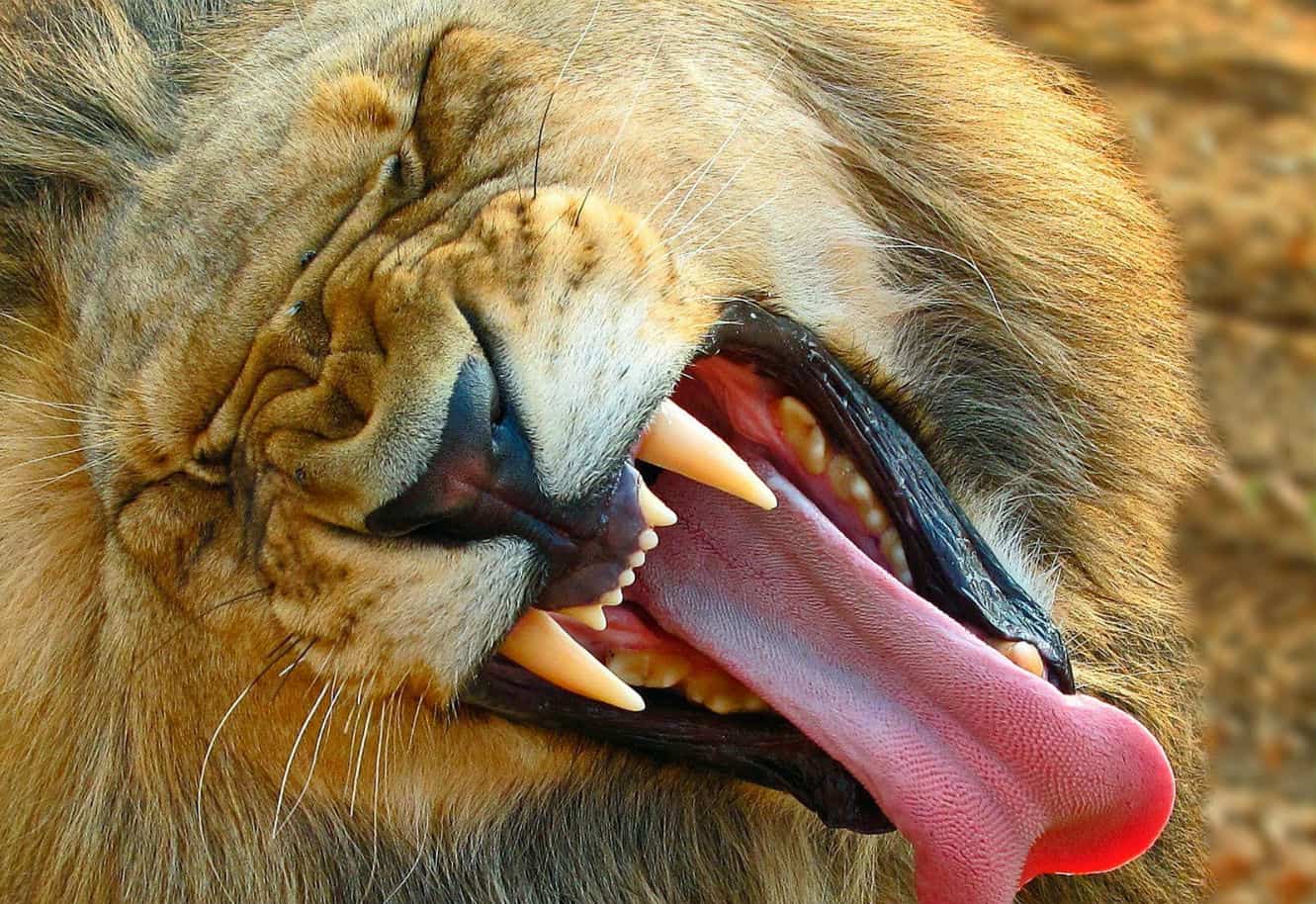 A lion’s tongue is as rough as sandpaper.  It is covered in tiny spines, called papillae, which face backwards and are used to scrape meat from bones and dirt from fur.  These spines make the tongue so rough that if a lion licked the back of your hand only a few times, you would be left without any skin!

Lion cubs are born with a greyish woolly coat, with dark spots covering most of the back, legs and face.  These spots act as camouflage, helping the cubs to blend into their surroundings to make them almost invisible in bushes or long grass.  The spots begin to fade around three months of age, although some keep them longer; even into adulthood.  As the cubs get older, their fur gradually begins to turn thicker and more golden in colour.

At around 12 to 14 months old, male cubs begin to grow longer hair around their chests and necks.  This is the beginning of their mane, which will not have grown properly until they reach the age of two.  Usually, the mane continues to gets longer and darker with age.  In some lions, it can stretch across their tummies and even onto their back legs.  Female lions, called lionesses, do not have manes.

Nobody really knows why a male lion grows a mane, but it is thought that it could be to protect its neck during the fighting.  It also can be used to make the male look bigger to scare off other lions and large animals such as rhinos. Another reason is to show off to female lions.  Lionesses seem to prefer males with dark manes.  It is thought this is because they appear stronger and healthier than those with light coloured manes and so can offer them more protection.

The length and darkness of a lion’s mane are affected by where it lives.  Lions living in warmer habitats have shorter, lighter manes than those in cooler areas.  It can even change as the temperature gets hotter and colder throughout the year.

Researchers are still studying male lions across Africa to understand why they have manes, but the real answer is that nobody knows for certain.  Maybe they never will. 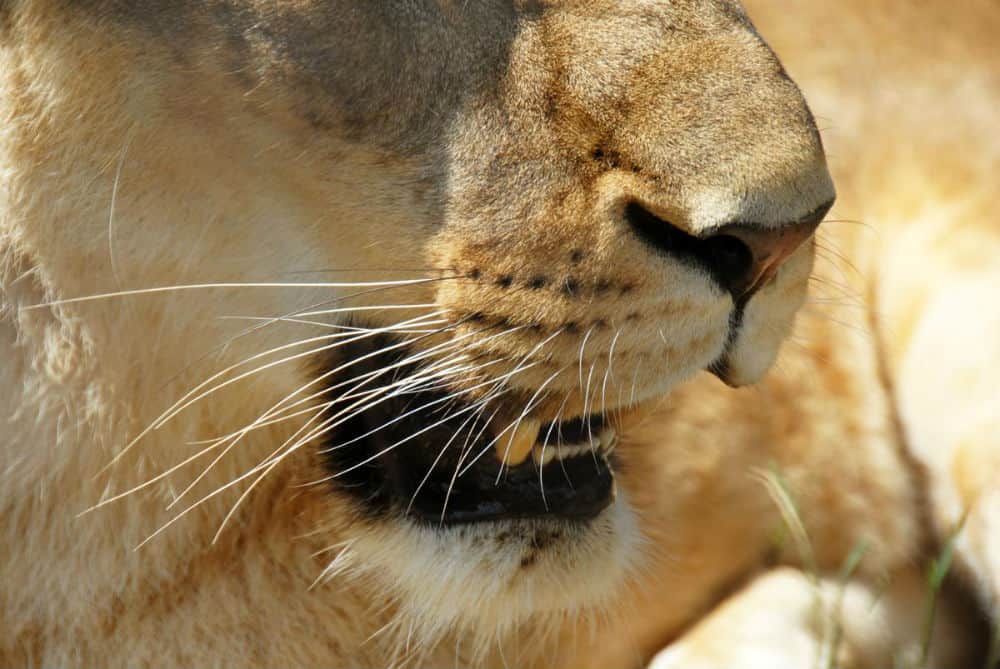 All cats have long whiskers and lions are no exception.  These are very sensitive hairs on the face, close to the nose, which are used to help them feel the things around them.

Each whisker has a black spot at its root.  The pattern that these spots make is different for every lion; just as our own fingerprints are different from everyone else’s.  Because no two lions have the same pattern, it is possible for researchers to tell them apart in the wild.

Just like a pet cat, a lion has a long tail which helps it to balance.  Unlike any other cat, a lion’s tail has a black tassel at the end, which first appears when it is between five and seven months old.  This can be used to lead other lions through long grass.  Females raise their tail to give a ‘follow me’ signal to their cubs and also use it to communicate with each other when hunting prey.  A lion’s tail also is a good sign of how it is feeling.  By flicking its tail, a lion can warn others to stay away because it is in a bad mood. 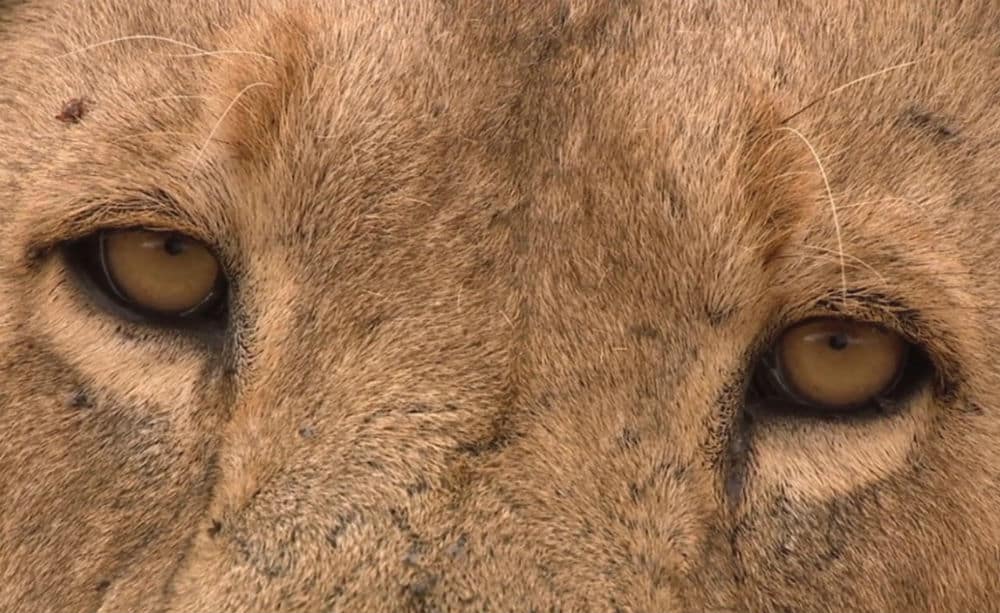 Lion cubs are born blind and don’t begin to open their eyes until around three to four days old.  Their eyes are a blue-grey colour at first and begin to change to an orangey-brown by the age of two to three months.

Lion’s eyes are quite large with round pupils that are three times as big as a human’s.  A second eyelid, called a nictitating membrane, helps to clean and protect the eye.  Lions can’t move their eyes from side to side very well, so have to move their whole head when they want to look in different directions.

At night, a reflective coating on the back of the eye helps to reflect the moonlight.  This makes a lion’s eyesight eight times better than that of a human.  They also have a white patch of furbelow their eyes which helps to reflect even more light back into the eye.

Lions have scent glands around their chin, lips, cheeks, whiskers, tail and in-between their toes.  These glands produce an oily substance to keep their fur healthy and waterproof.   Humans have similar glands which make our hair greasy when we haven’t washed it for a while. 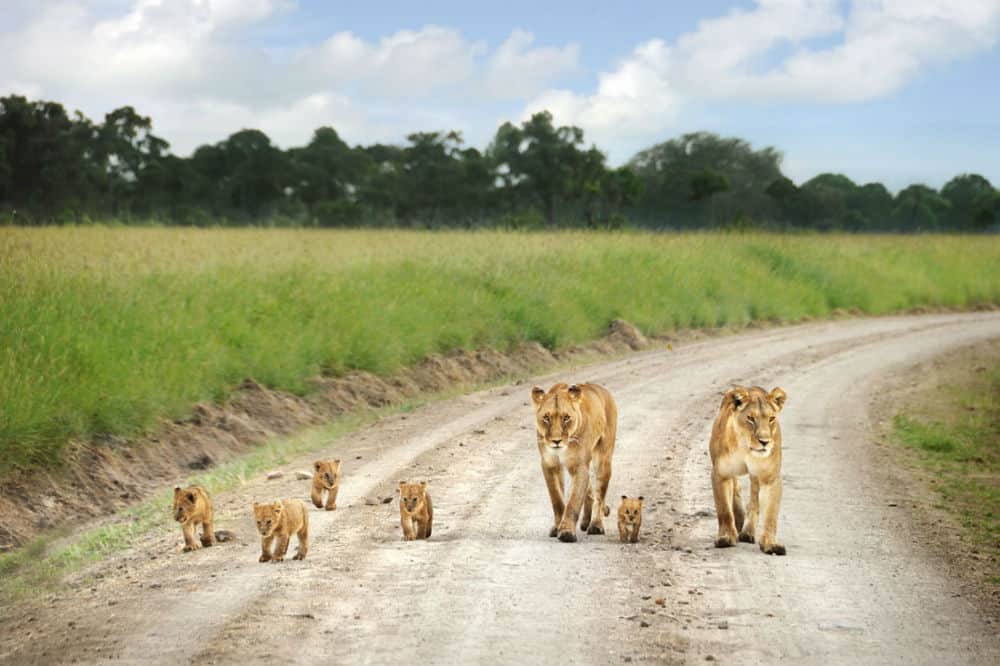 If you ever see a picture of a lion curling up its top lip and pulling a funny face, the chances are it’s using something called its Jacobson’s organ.  This is a small area in the roof of the mouth that allows a lion to ‘taste’ smells in the air.  By showing their teeth and sticking out their tongues, lions are able to catch hold of smell to work out if it’s coming from something worth eating.

Lions have a good sense of hearing.  They can turn their ears in different directions to listen to sounds all around them and are able to hear their prey from a mile away.