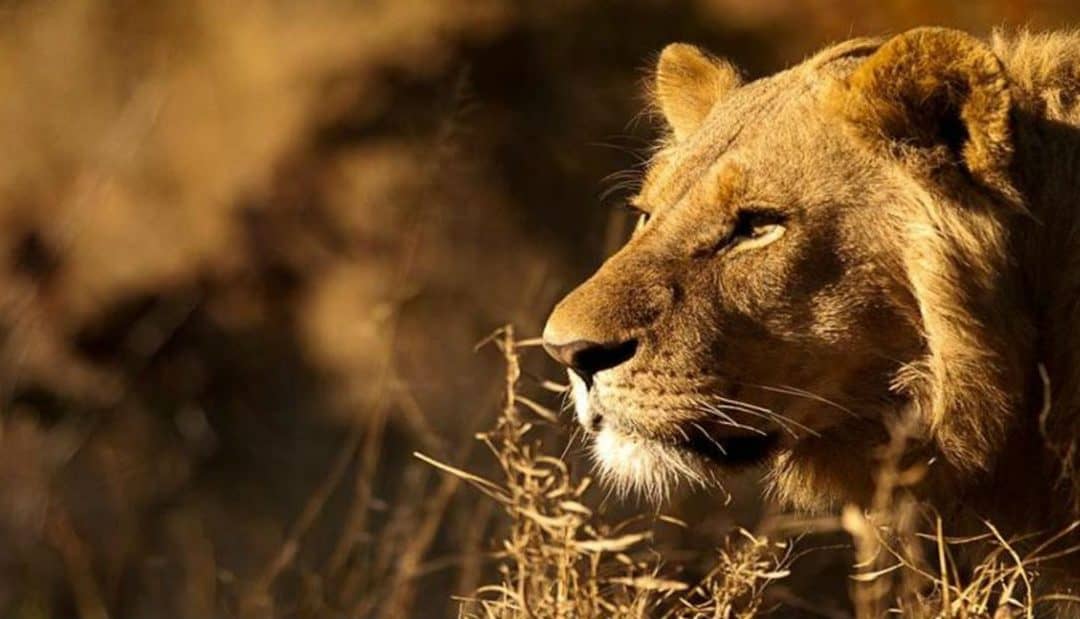 The oldest known animal-shaped sculpture ever found is a half-human half-lion, carved from the tusk of a mammoth during the upper Palaeolithic period in South Germany, 32,000 years ago.  It is possibly the eldest of the ancient gods, there is no similar find like it from this period.  A

ll other finds in the area were singular representations of animals, with no other morphological combinations of men and animal, suggesting the lion-man was perhaps used for specific ritual purposes. 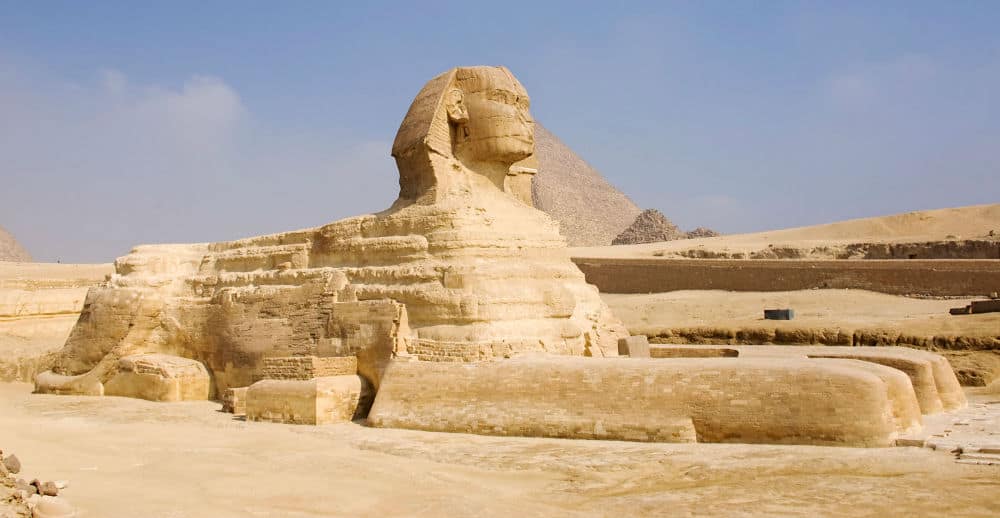 Across history and across religion, the half-human half-lion is an icon of remarkable consistency and persistency.  It is present in ancient Egypt with the Sphinx as a half-human half-lion Goddess, the Protector of the Pharaohs.  From Persia to Rome, the lion was a symbol of the sun god Mithra, whilst the Etruscan lion with wings stands at the entrance of the Temple Mountain at Troy.

In Islam, Muhammad’s son-in-law and cousin was known as the Lion of God, whilst a lion-headed angel is one of four beings that supports Allah’s throne.

The lion is also deeply ingrained in Buddhism – lions were frequently pictured with bodhisattvas who guide people to the path of enlightenment, whilst Manjusri, a bodhisattva who is symbolic of transcendental wisdom is frequently on the back of a lion.

The lion is not merely present across the major religions; it also suggests links or commonalities to the roots of many religions.  For Jews, the lion is a symbol of messianic promise and redemption.   This has parallels to both ancient civilisations and Christianity.

The Egyptian Warrior Goddess Sekhmet (pictured to the right), most commonly depicted as a lioness, was the fiercest of warriors, creating the desert from her breath and believed to be a terrifying goddess worshipped as “the destroyer”. 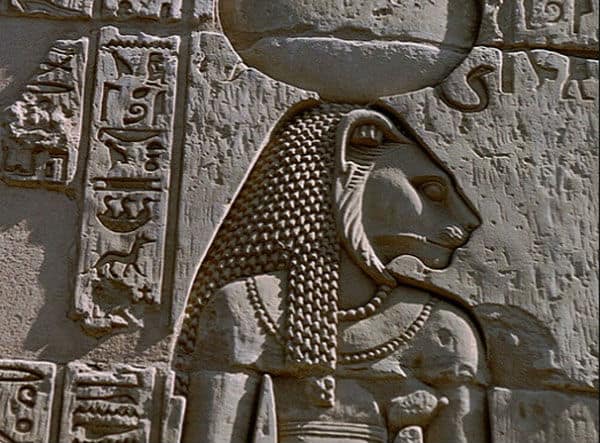 Amongst the Hindu Gods and Goddesses, you find a parallel, as echoed by the Goddess Kali, the Creator, who starts the motion of the ‘Wheel of Universal time’, creating the Universe, and at the end of the cosmic cycle of manifestation, devouring all of Creation.  Both are solar deities, and the Vedic Sastra tells us Kali’s consort, Lord Vishnu appeared in the divine form of half-man, half-lion, Narasimha, to stop the demon Hiranyakasipu promoting irreligion.  Both half-human half-lion(ness)s are protectors, destroyers and redeemers, similar to the Jewish role of the lion.

In parallel to the Jewish and Hindu religions is the Christ-lion.  With its built-in halo, the Christian lion is often pictured with a book or scroll, in his role as humanity’s judge and teacher.  The Christ-lion, the Lion of Judah, is a beacon of light, courage, bravery, agility and dignity.  And he is a fighter, symbolic of the line of David and of Kings.  Jesus descended from the tribe of Judah and is mentioned as being the Lion of Judah in Revelation.

The role of the Lion of Judah links to the destiny of man.  In the Book of Revelation, we learn:

‘No man in heaven or in earth, neither under the earth can open the book of seven seals’.

‘And one of the elders saith unto me, weep not: behold, the Lion of the tribe of Judah, the Root of David, hath prevailed to open the book, and to loose the seven seals thereof’.

Jesus is commonly referred to as the ‘overcoming one’ and ‘the one qualified to open the scrolls and seven seals’.

This is of some significance, especially when considered in the context that the lion, like most sun symbols, became an emblem of Christ, the ‘light of the world’, with Christianity’s arrival.  The lion energy of all energies, in opening the seven seals, delivers the great reckoning, the retribution that The Book of Revelation talks of, destroying the dark, and unleashing the wrath of God on the sins of humanity, cleansing the earth to a renewal and one thousand years of peace.  The great reckoning wipes out most of humanity, leaving 144,000 humans in the form of the 12,000 people in each of the 12 tribes of Israel.

The lion, being a sun symbol like Jesus represents the light of the world, but is also the great destroyer of darkness, bringing light back into the world.  The prophecy of the coming of the Lord to ‘judge the world’ as the Lion of Judah is clear all through Revelation 5:1-5.  Jesus was slain by the darkness of humanity and returns as the Lion of Judah to judge humanity and in so doing rid the World of its darkness.

The Hindu half-lion half-man God, Narasimha (pictured to the right), actually plays a similar role to the Lion of Judah.  His consort Kali is the Destroyer, and Narasimha wipes out irreligion, which is metaphorically similar to the wiping out of Darkness in The Book of Revelation.  There is is a further link between the Lion of Judah and Narasimha.  The link between the two lions is suggested in their respective religious texts. In the Bhagavata Purana, there is the line:

‘He was, He is and He Will Be.’  This refers to Lord Vishnu who is Narasimha.

In the Book of Revelation 1:8, there is the line:

‘I am the Alpha and Omega, the Beginning and the ending, saith the Lord, which is, and which was, and which is to come.” 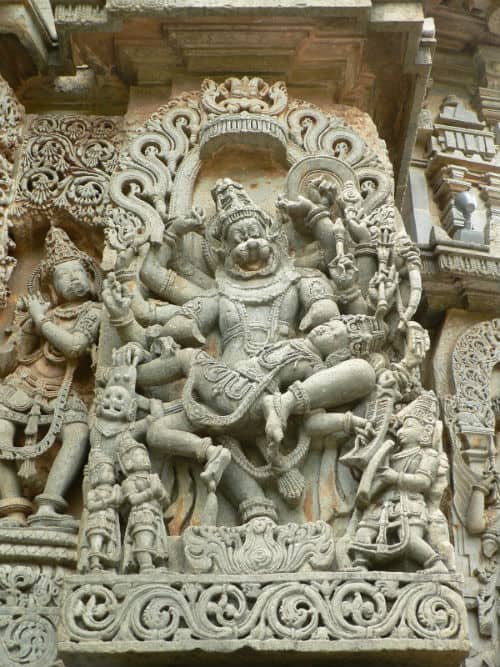 This is Jesus who is the Lion of Judah.

These similarities may be no coincidence.  The lion is endemic through religious texts, and the lion merged with the highest beings of a religion (Vishnu / Jesus) is thus at the pinnacle of both religions, whilst also at the apex of the animal kingdom in Africa on Earth.

In religion, lion’s are merged with human Gods.  Lions are revered as Kings.  If humanity emulated this on Earth as in Heaven, lion’s may not be staring down the barrel of a gun facing extinction.