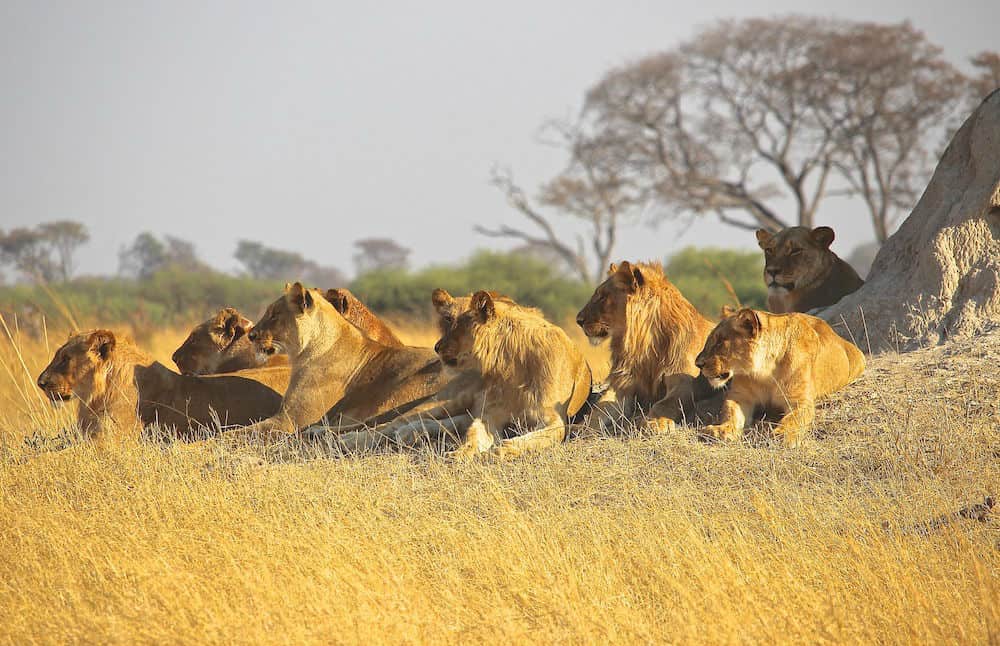 The genetics of lions

Fossil evidence suggests that lions have roamed the world’s wildernesses for approximately 1.8 million years, and were formally the most widespread large land mammal on Earth. They ranged through Europe, Asia, the Americas and throughout Africa. It is speculated that the decline in their geographic range was due to expanding human populations and their activities, as well as climate change that occurred at the end of the Pleistocene era, causing a mass extinction of large mammals.

Currently, wild populations of modern lions (Panthera leo) reside only in Africa and Asia, in which these two subspecies (P. l. Leo and P.l. persica, respectively) are becoming increasingly endangered; subsequently being listed as ‘vulnerable’ and ‘endangered’ on the International Union for the Conservation of Nature (IUCN) red list.  Although it should be noted that up to 24 subspecies classifications for lions have been identified these were based solely on geographical and morphological aspects, e.g. mane size, body size, mass, skull size, colour etc.

Recent genetic studies of lions have provided support for some of these earlier classifications and therefore mark the importance of genetic research.  For instance, males of the now-extinct North African Barbary lion (P.l. Leo) and South African Cape lion (P.l. melanochaita) were known for their huge manes extending behind the shoulders and reaching the underside of their belly, which was used to identify and justify their subspecies status. However, a lion’s mane can be influenced by various external factors, such as ambient temperatures. Therefore, manes are an inappropriate marker for identifying different subspecies of lions, and instead, molecular markers should be used. One study analysed the DNA sequences of museum specimens of these extinct lions and found that the Barbary lion was probably a distinct population characterized by a unique group of mitochondrial genes (haplotype), while the Cape lion is likely a part of the extant Southern African lion population as it possessed one of the two haplotypes (haplotype -5) that were widespread in Eastern and Southern Africa today. Haplotype -11 was found to be a good molecular marker for identifying Barbary lions (a limited number exist in captivity, largely derived from lions owned by the King of Morocco).

Due to the subspecies classifications being based on non – scientific evidence, the IUCN documented only 2 subspecies of lions after one of the earlier genetic studies made the distinction between African lions and Asiatic lions.

The Asiatic lion (P.l. persica), only found in the Gir Forest in Gujarat Province, India, has a number of characteristics to help distinguish it from their African counterparts; one of these being an abdominal skin fold.  98% of the Asiatic lions in a sample were found to possess the fold of skin compared to 4% of African lions. Secondly, it is also found that Asiatic lions have what is called a ‘bifurcated infraorbital foramina’, wherein there are two small holes in the skull that serve as a passageway for nerves and blood vessels to reach the eye. African lions have only one infraorbital foramen. Genetic analyses of these characteristics showed that they are a heritable trait of the Asiatic lion and occur at a high frequency; thus exhibiting a high ‘genetic penetrance’ for these features.

The prediction was made that the Asiatic lions went through an event (most likely towards the end of the Pleistocene era) which drastically reduced the size of the population (i.e. a population bottleneck), followed by inbreeding.  Consequently, this led to a genetically homozygous population.  However, a subsequent study suggested that the low genetic variability of the Asiatic lions may have been a feature of the original population rather than a result of inbreeding.

Nevertheless, there are clear genetic differences between the Asiatic and African lion, which supports the subspecies designation of Panthera leo persica and Panthera Leo.   A recent study, however, has found that lions from West and Central Africa show a remarkably close genetic relationship to lions from India than to those residing in South and East Africa.

Genetic sequences from lions all over Africa, India and even from the Barbary lion were analyzed, where genetic variance was found to be relatively small amongst West African lions, with many sharing the same group of genes. In contrast, lions from Southern and Eastern Africa showed more mutations between different haplotypes, thus displaying more genetic variation. The low genetic diversity is shown in West and Central African lions were perhaps due to regional extinction followed by re-colonization. The West and Central African regions suffered from very dry climate conditions during the Late Pleistocene leading to a lack of prey and regional extinction of existing lions. Eventually, more humid conditions made re-colonization of West and Central Africa possible and it is likely that these colonizers came from lion populations in Northern Africa with a genetic resemblance to those in India.  Natural structures, such as the Rift Valley and the African rain forests could have acted as barriers to maintain differences between Western and Central African lions and those in Southern and Eastern regions.

This study provides vital evidence that the genetic diversity within lions may be greater than just the two subspecies that have been recognized by the IUCN and further consideration is needed in order to conserve genetic diversity.

Other recent molecular genetic analyses have provided support to the argument that there are more than just two subspecies of lions, with one study finding three genetically distinct lion populations in different areas of Africa (the North African – Asian population, Southern Africa, and Central Africa). In this study, eleven different haplotypes were identified from 32 lion specimens. Haplotypes M2 and M5 were found to be prevalent in Eastern and Southern Africa (although M5 was geographically restricted to the Southwestern side of the Great Rift Valley), whilst eight of the haplotypes were found in the lower regions of Africa and haplotypes M9 – M11 were found only in North Africa – Asia. The results also showed sub-Saharan African lions have a larger range of genetic variation than other modern lions (i.e. the North African – Asiatic lions), and it is suggested that the centre of origin for modern lions is probably within Eastern – Southern Africa. 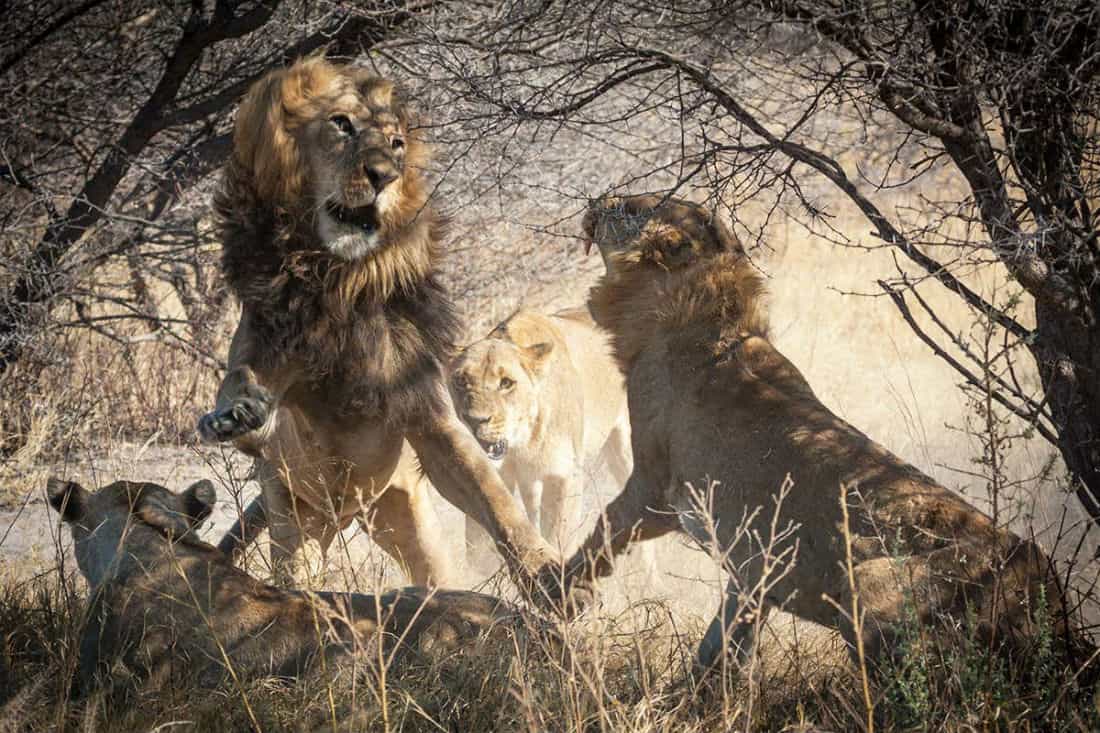 Another study, which was suggestive of geographic differentiation, concentrated on examining DNA sequences of lions from throughout sub – Saharan Africa. Six distinct haplotypes were found within two major groups of lions that had evolved from a common ancestor (a clade). The first clade was formed in southwest Africa while the second was found in the east, extending from eastern Kenya south to KwaZulu – Natal in South Africa. The latter clade can be further subdivided along each side of the Great African Rift that stretches into Southern Africa.

The haplotype from Tsavo in Kenya was identical to the haplotype from South Africa’s Transvaal region but differed from the haplotype found at Aberdares National Park in Western Kenya. The Sabi Sands (in the southern part of Kruger National Park in South Africa) haplotype was unresolved and it was not able to be placed in either of the clades, thus this study found four distinct units:  South – West Africa, East of the Rift Valley, West of the Rift Valley and the Sabi Sands. Once again, the genetic variance documented here argues against subspecies classifications among Eastern and Southern African lions.

Yet again, another study has provided evidence of sub-speciation in the African lion and refutes the hypothesis that African lions consist of a single randomly breeding population. Large samples of lions from the majority of the major lion populations in Africa were used and the authors assessed the prevalence and genetic variance of the lion specific feline immunodeficiency virus (FIVple). The virus is well studied in lions, mutates faster than the host and thus provides a good opportunity to study the recent evolutionary history of lions.  Eleven groups were identified in this study:  two distinct clusters in Botswana, in which the first group (Bot-I) included lions from Southern Botswana and Kalahari (South Africa) and the second cluster (BOT- II) was found exclusively in Northern Botswana.  Surprisingly, lion and FIVple variation showed evidence that the lion population occupying the Serengeti Ecosystem is derived from three distinct genetic groups that have recently mixed together (SER-I, SER-II and SER-III).  A further six clusters were found in Namibia, Kruger National Park, Ngorongoro Crater, Kenya, Uganda and the Gir Forest.

Genetic analyses also found 12 haplotypes, with the most common haplotype (H11) found in Uganda/Tanzania (East Africa) and parts of Botswana/South Africa. Haplotype H1 was common in Southern Africa and haplotypes H7 and H8 were unique to Asiatic lions.

All these findings suggest that the genetic diversity within lions is greater than what has previously been implied and especially for the Western and Central African lions argues that there are more subspecies classifications than just the two that are adopted by the IUCN.  Thus, it would seem more appropriate for future conservation strategies to take these subdivisions into consideration. As there is a lack of consensus on the classifications of lions, conservation efforts in parts of Africa could be compromised. For example, the lions in West and Central Africa should be characterized as ‘critically endangered’, but as their status, as a separate lion subspecies remains unacknowledged they have not been officially recognized as endangered.  It is clear that lion conservation would benefit from a better understanding of lion subspecies, and conservationists should acknowledge genetic distinctness of lion populations in their current and future projects.

Increasingly, lion populations are becoming isolated or are confined to protected areas that have limited gene flow. Managing these populations appropriately is vital in order to minimize loss of genetic variability.  The method of translocating lions can prevent this loss and ideally should mimic natural gene flow by transferring those from a nearby area that are genetically similar.  In cases where lions are to be restored in depopulated areas, only animals with an appropriate genetic background should be used.