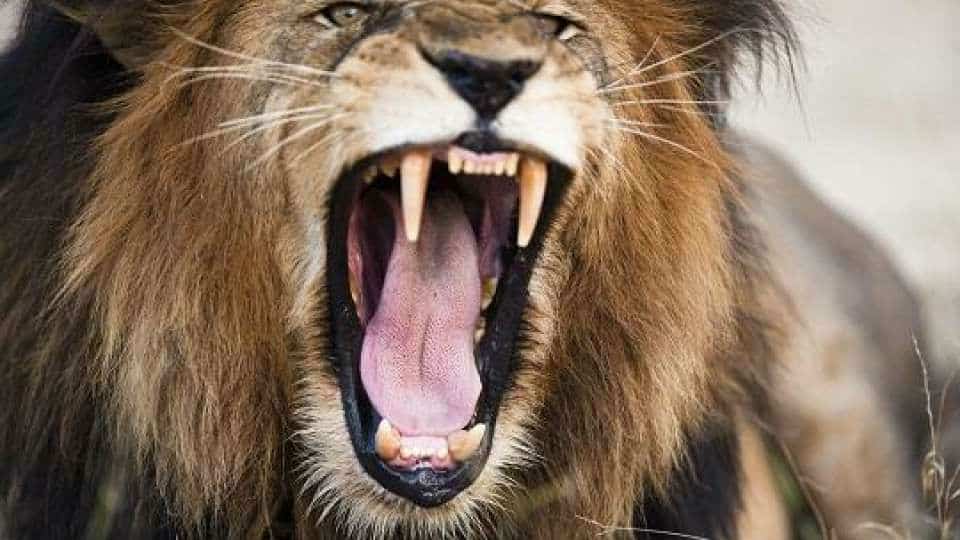 Physiology of the African Lion

Lions are unusual amongst cats in displaying a striking sexual dimorphism due to the availability of a large number of females in grouped social structures allowing larger males to be able to monopolize breeding.

There are significant differences in the size of both within and between lion populations.

* from near Mount Kenya, Kenya
** from Kruger NP, South Africa 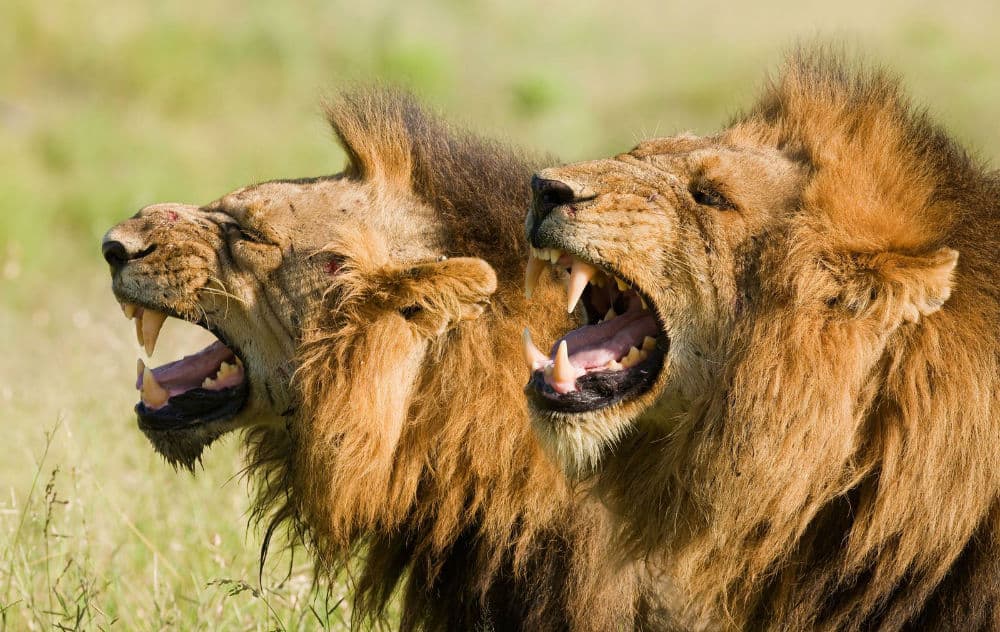 Armed with canines up to 7cm in length, jaws which can exert 690lbs of pressure and which are hinged to allow a gape of 11in, the lion’s mouth is an intimidating place.

Like all other mammals, the African lion has a fixed arrangement of teeth which can be generalised into a dental formula. This formula can only be effectively applied to adults as, like all other cats, the permanent teeth only begin to erupt at around three months of age, pushing the deciduous teeth up and eventually causing them to fall out. The full set of adult teeth are gained between the age of 13 and 15 months.

The dental formula can be determined by dividing the skull in the middle, then starting at the symmetrical midpoint and counting the teeth moving backwards along the jaw. Each type of tooth is counted individually, with top teeth being the number in front of the slash. The whole dental formula for a lion is I=3/3 C=1/1 P=3/2 M=1/1. I= incisors, C= canines, P= premolars and M= molars, meaning a lion has 30 permanent teeth.

The dentition of any animal is a structural adaptation to its diet and therefore directly related to its feeding, foraging and hunting behaviour.

The front canine teeth are spaced such that they can slip between the cervical vertebrae of their prey severing the spinal cord and also to rip chunks of meat away from the bone.

Premolars and molars are termed as carnassials. These are specially located at the cheeks of the lion and are very sharp so as to perform their specified role – that of slicing. The shapes of the back teeth make them work like a pair of scissors and this is also aided by the stiff jaws that cannot move from side to side, which helps keep the carnassials teeth in alignment for cutting. 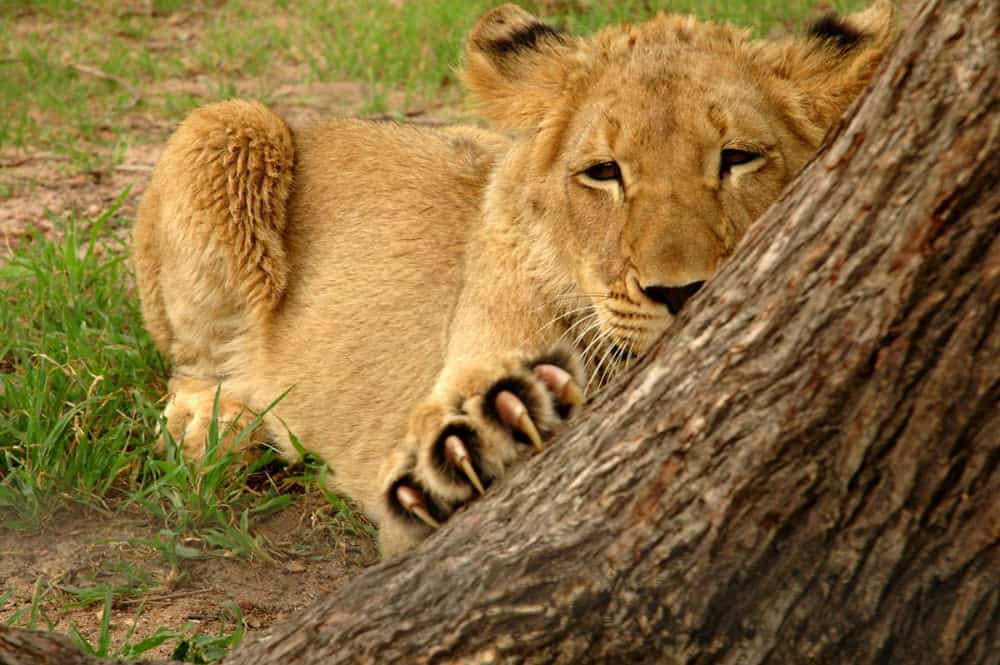 The retractile highly curved claws can be up to 38mm / 1½in. in length.

Lions have four claws on their back feet but five on the front where the dewclaw is found. This acts as a thumb and is used to hold down prey while the jaws rip away the meat from the bone. Set well back from the other claws the dewclaw does not appear in the print.

Claws grow as a series of layers; as each layer wears away it is shed and a new sharp-pointed claw is exposed.

The tongue is covered in backward curving spines called papillae, which help to scrape meat from the bone and for efficient grooming

Lion cubs are born with woolly, greyish coats. The coat is spotted (some more so than others), especially on the head, legs and back which aids in camouflage against their many predators, including hyena, leopard and buffalo. Most spots disappear after three months however leg spots are often visible well into adulthood.

The colouration of the fur varies from region to region, and within populations, including between siblings, however, lions in areas that are either cooler or that have higher humidity levels tend to have darker fur. 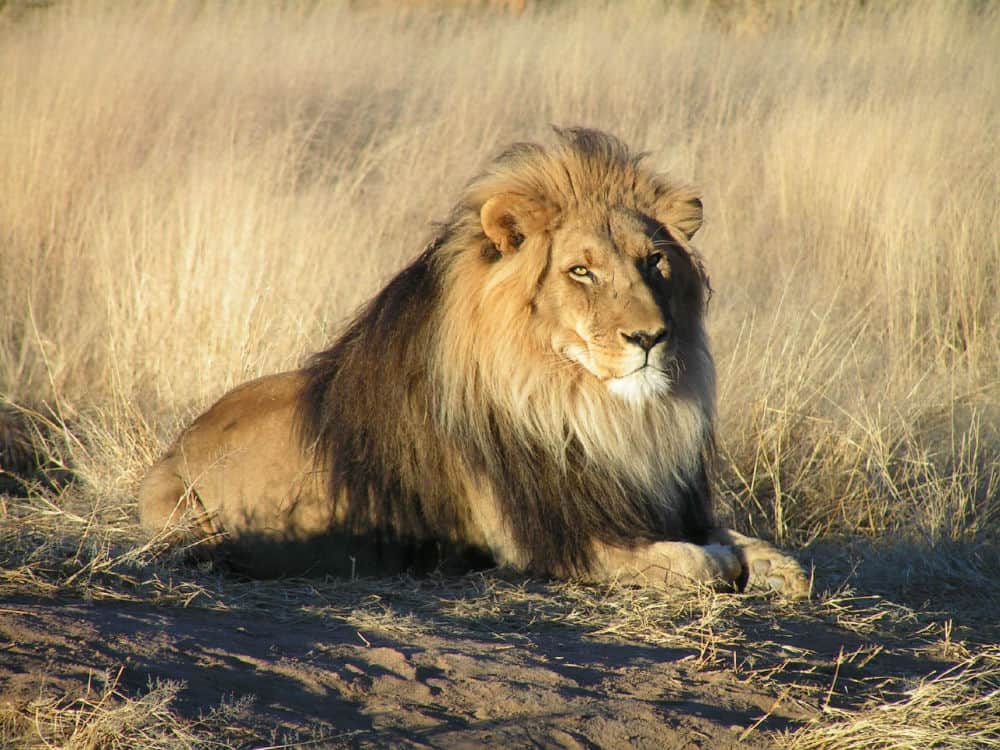 Throughout history, manes of male lions have inspired admiration and fear yet no consensus has been reached concerning its function.

Three elements must be considered when looking at manes; only males have them; manes start to grow at puberty; and manes vary greatly in both colour and extent, both between and within populations. Such elements lead to the assumption that the mane is, therefore, a product of sexual selection, either for competition between males or in making a male more attractive to females.

Female lions live in prides resulting in severe reproductive competition. This has lead to the formation of coalitions of males working together to take over a pride. Larger coalitions are more likely to be able to oust a sitting dominant male, are more likely to hold the pride tenure for a longer period and are therefore able to sire more cubs. Females reproduce in synchrony meaning that more than one female may be in oestrus at any one time, allowing several members of the coalition opportunities to mate. This social system, therefore, allows for sexual selection between males as well as in mate choice.

Darwin suggested that manes were used to protect the male during fights, however, there is greater advantage of avoiding a fight altogether. This requires a signal that can convey the fighting ability.

From the females’ point of view, incoming males kill all the cubs present in order that they can start to reproduce and pass on their genes. A female can benefit from a signal that a male is able to protect her cubs. Further, males are an important asset in providing food for the pride. Buffalo are slow prey and require the strength of a male, rather than the speed of a female to catch. As such, a signal to a female of a male’s hunting ability and the physiological condition is very valuable.

In sexual selection, hair is condition-dependent, and its extent and pigmentation are linked to testosterone levels as well as nutritional deficiencies. A study by West (2005) therefore hypothesised that manes may function in any of three ways; as a shield against injury, as a signal of the males fighting ability and as a sign of a males physiological status. The study set out to look at each of these three functions:

If true, the first function, that of shield against injury, would suggest that males with larger manes are injured less frequently or less severely. As fights between lions are rarely witnessed, the study looked at two other ways of testing the hypothesis. Firstly, if the mane is a protection then that would suggest that the mane area is attacked more often and that these areas would, therefore, show more wounds, and secondly, that injuries to these areas would be more severe. The study, however, found no evidence that the mane area was more likely to be attacked, nor with greater severity, and wounds on males showed the same distribution and severity as were found on females and sub-adults that do not have manes.

The study started to look at the second and third possible functions, that of the mane as a signal of fighting ability and physiological condition. It was found that the manes of males of the Serengeti study area changed over time both in length and pigmentation, and also that manes grew longer and darkened with the increase in testosterone during adolescence.

The study also found a correlation between mane length and colour and several ecological factors; in males over five years of age, mane length was closely associated with injury, leading to a possible signal that a short mane was an indication of lower fighting ability.

Given the possible signalling properties of the mane, the study set out to test whether lions actually used these signals in their social behaviour. Loudspeakers were used to broadcast the sounds of a female in oestrus. Although mane length was not a significant indicator, males with darker manes were far more likely to win the race to the “female”.

Where there is more than one female in oestrus at any given time, the female is able to make a choice as to which male to mate with. The study, therefore, looked at mating situations where a male mated with more than one female within an hour, on the assumption that at least one of the females was there by choice. In only 50% of examples did the females choose a male with the longest mane length, however in all but one case, the female chose the male with the darkest mane.

To try and answer the question why females did not respond to the signal of mane length when a short mane could be an indicator of injury, the study used dummy lions of varying mane length and colour. The tests showed that females would approach a darker maned dummy, but did not take account of mane length. Males avoided the dark maned males, and were extremely sensitive to mane length, avoiding the longer maned dummy. Data from these studies, when added to results from previous studies concluded that darker maned males are more likely to reside in a pride, are more likely to survive the injury, have more surviving offspring, and are less likely to be wounded. Short manes appear to be a signal of short term injury. The study went on to ask the question of why all males do not have dark manes, hypothesising that there must be some sort of cost to growing and maintaining one. Males in cooler climates tend to have darker manes than those that live in warmer climates, and a male taken from a warm climate to a cool one is likely to show a darkening of their mane as they acclimatise to the new location. Lions are particularly sensitive to heat as they do not sweat and can only dispel heat through their skin, a process made less efficient by having a mane, especially a dark one. It is therefore highly likely that only the strongest, fittest males can afford to maintain a dark mane.

The study goes on to suggest that global warming and rising temperatures will have an effect on lion populations as the heat stress of darker manes becomes too much and the trait will become less common, with negative effects on photographic tourism and legal trophy hunting industries. For the lions themselves, it may become necessary to adapt behaviorally and/or physiologically to overcome the loss of this important sexual selection signal.

So why are the lions of Tsavo maneless? A study of the number of females in prides has refuted the notion that smaller group sizes lead to reduced sexual competition. Further, hunting has been banned within the Park for many years dispelling the idea that the off-take of large maned males has bred smaller manes into the population. As such, maybe there is a higher environmental cost to holding a mane in this hot, arid area? The thornbush habitat may have an effect. Males tend to take part in hunting more often in closed bushy habitats than in open grassy plains where their conspicuous mane makes hunting more difficult. In such habitats, a mane can easily get snagged as they stalk through the Bush impeding movement and making noise. Thirdly, the burrs of the plant Pupalia lappacea are abundant in Tsavo and even the dextrous fingers of the local baboons struggle to entangle them from long hair.

What is not clear is whether manelessness has evolved as an adaptation to some aspect of the Tsavo environment (i.e., genetic cause) or if the thorns and burrs merely pull out the mane as it grows in adolescent males (i.e., environmental cause). If mane hair is pulled out in each generation of male lions, young males would be expected to have larger manes, and individuals in more open habitats would be expected to retain their manes longer. If manelessness is a newly evolved adaptation, the mechanism may involve testosterone (or its derivatives), which is linked to hair growth and hair loss in mammals.

The mane in males develops during their second year and is complete in the fifth; mane colour ranges from blond to black.