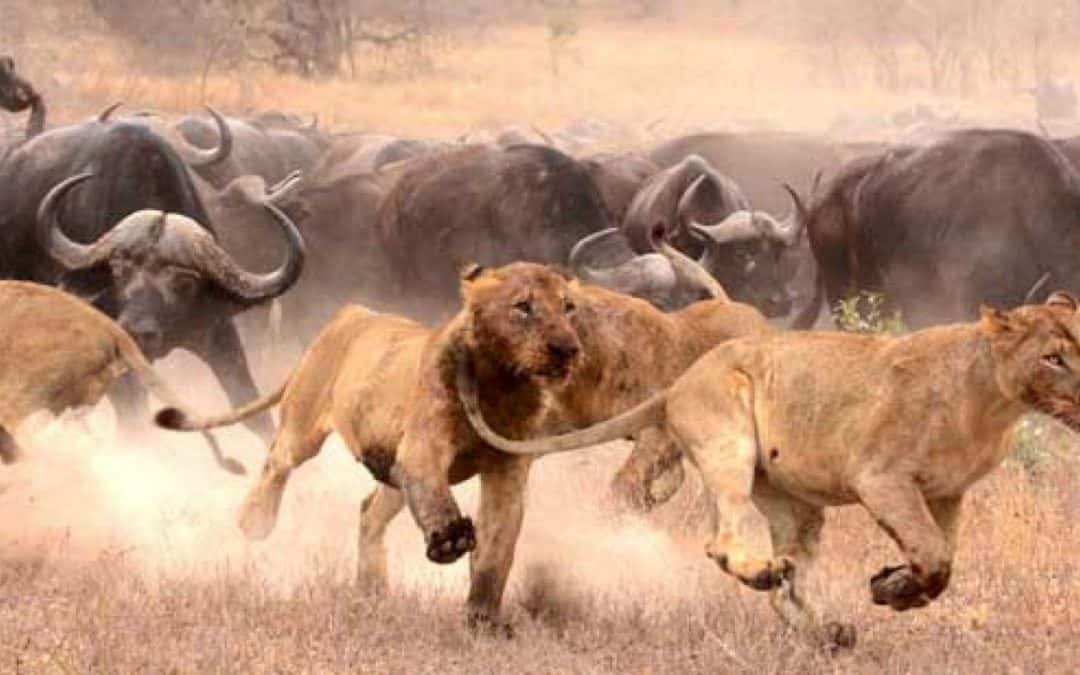 With relatively small hearts and lungs, lions are not fast runners; a maximum speed of 60kph, nor do they have the stamina to keep this pace for more than a 100 – 200m.  As such, lions rely on stalking their prey and seldom charge until they are within 30m unless the prey is facing away and cannot see the charge.

Lions stalk their prey, although ambush behaviour has been observed.  This happens mainly during daylight when stalking prey is more difficult.  Of 1,300 hunts observed in the Serengeti, 48% involved only one lion, 20% involved two, and the remainder involved a group of three – eight (up to 14).

Females do the majority of the hunting, and males who tag along with the hunt usually stay back until a kill is made. Lions hunting in pairs and groups have a success rate of c. 30%.  Lions hunting singly by daylight have a success rate of 17 – 19%, but are the equal of groups at night reopening the debate as to why lions became the only sociable cat; maybe it is to control exclusive hunting grounds.

Most successful hunts are on dark nights in dense cover against a single prey animal.  One reason for lions’ relatively low hunting success rate is that lions do not take into account wind direction when hunting; they often approach prey from an upwind direction thereby alerting the prey and ending the hunt.  Secondly, the lion’s charge is generally launched directly at its quarry and it rarely alters the path of attack, as do other cats.  Generally speaking, if a lion misses its target on the first run it usually abandons the chase.

Cooperative hunting brings a greater probability of success in lion hunts, but a question exists on whether pre-planned cooperation is taking place or that lions are making use of opportunities brought about by the presence of other lions.

Studies of the tactics of group hunting by lions give a similar basic plan of the hunting process. When the group spots the prey a hunt is often initiated by a single lion looking at it, to which the other lions respond by looking in the same direction – the only clear form of “communication” evidenced in the hunting process. The group fans out, with certain lions stalking at a greater distance to encircle the prey. The encircling lions launch the attack, seemingly to drive the prey towards the others who ambush from their cover position.

It is suggested that lions often, but not exclusively, followed the same hunting patterns and divided lions into stalking roles; left, centre & right-wing positions. Lions hunting in their preferred roles increased the success of the group by 9%.

Once within range of smaller prey, lions use their paw to slap the rear of the animal at its legs or haunch to knock it off balance or drag it down.  A bite to the neck or throat quickly kills the animal.

With larger prey lions approach the animal at an angle, jumping on top and using their own weight to wrestle the animal to the ground, biting at the vertebrae in an attempt to sever the spinal cord as they do so.

Once downed they bite the throat or over the nose and mouth of the prey to suffocate it, a position that keeps them out of the way of horns that could injure the lion.

When plenty of food is available lions gorge themselves into near immobility.  At these times, on average, males swallow around 15% of their body weight.

Food is shared grudgingly.  The smallest and weakest lions often lose out altogether and hungry mothers will not even share with their own offspring.

Lions usually start feeding by opening the abdomen and eating the entrails.  Most lions will eat the heart, liver and kidneys, but it unusual for lions to open up the skull.

Man-eating has been recorded wherever lions are found, but humans appear to be regarded as competing predators rather than as prey.  In Tanzania, it has been noted that more people are killed during the rainy season when the tall grass makes hunting more difficult.  Notable cases of man-eating include a pair of males who killed 28 Indians and “dozens” of Africans in Tsavo, Kenya, at the end of the 19th century and a single male who killed 48 humans at Ankole, Uganda, in the 1920s.

The greatest toll was from a man-eating pride which killed around 2,000 people in the Njombe district of Tanzania between 1932 and 1947.