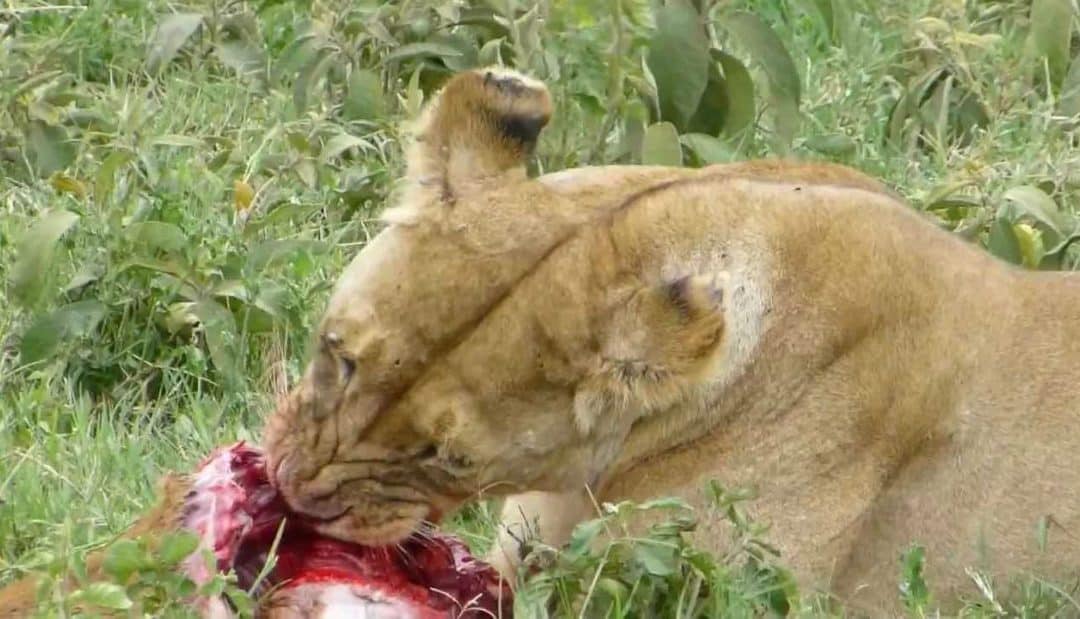 They eat many different kinds of animals, known as prey.  Lions can eat a LOT!  Male lions will eat an average of 7kgs of food a day and lionesses 4.5kgs.  Both are capable of eating up to 15% of their body weight during just one meal.  For a male, that’s the same as 70 cans of cat food!  Lions are well known for being greedy and will hunt animals even when they are not hungry.  When tucking into a juicy zebra, if another animal comes near, a lion will often forget about that kill in its eagerness to catch some more food.

Lions can’t run very fast.  With a maximum speed of 60 kilometres per hour, compared to a cheetah’s 97kph, they are pretty slow.  Plus, they can’t run for very long without getting out of breath.  Because of this, lions need to be clever hunters.  By stalking their prey they are able to get as close as possible before the chase begins.  Very slowly, crouching near to the ground, lions creep as near to their victims as possible.   Making sure they haven’t been seen or heard, they can then jump on an animal very quickly, taking it by surprise.

When hunting smaller animals, lions will often ankle-tap their prey.  By clipping an animal’s ankle from behind while it is walking or running, the lion aims to trip it up, making it easier to catch.  Larger animals are brought to the ground by jumping on their backs.  This is usually when the bigger, stronger male lions decide to join in. 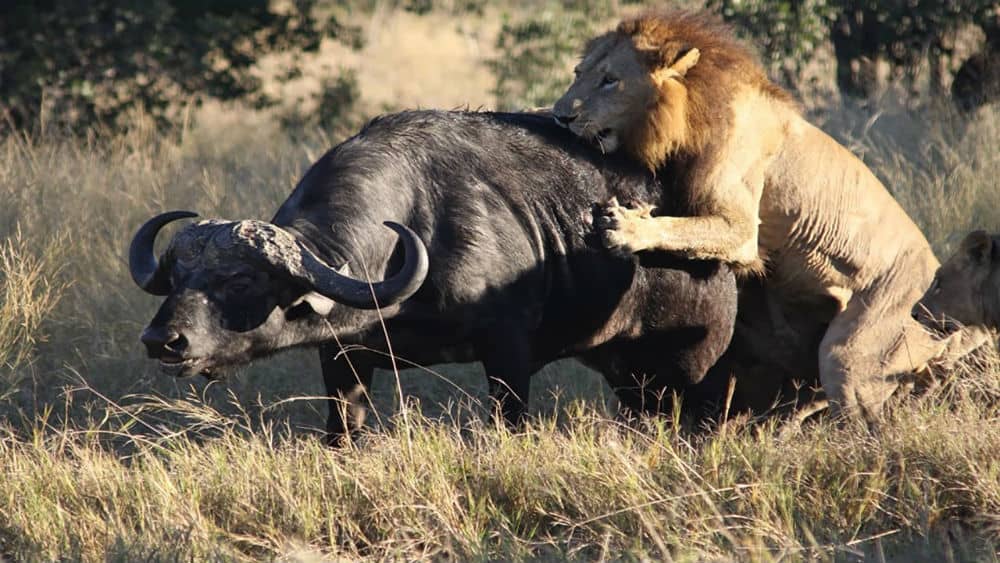 Although lions are able to hunt alone, it can be much easier to have a little help.  When hunting in a group, each lion has its own place.  Just like in a football team, they will choose to be in either a left, right or centre position.  If stalking is too difficult, a group of lions may decide to ambush their prey instead.

Running very quickly at an animal forces it to run towards other lions, or into bushes, where it will be trapped.  Working together like this means that the lions are much more likely to catch their prey.  Lions have even been known to climb trees and jump on top of unsuspecting elephants as they walk underneath!

Even though lionesses do most of the hunting while the males just sit and watch, once an animal has been caught it’s the males that are always first to feed.  Lions are good at working together to catch their prey, but they are terrible at sharing and will fight over their food.  Often smaller, weaker lions go hungry, while the others are first to have their fill.  Depending on the size of the kill, they may not get anything at all. 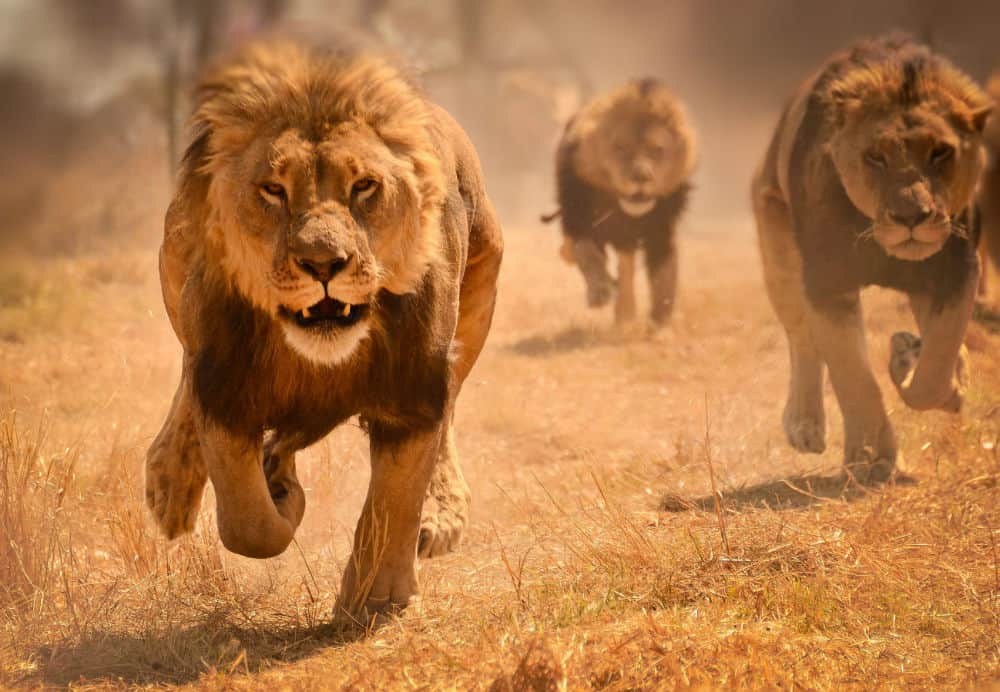 Lions are also scavengers and will happily steal food from other animals, or eat leftovers after a kill.  This means than when other carnivores have caught prey, lions will often bully them into giving up their meal.

This doesn’t always work with hyenas though, who also live in a family group called a clan.  If there are more hyenas than lions, often they will get to hold on to their food.  Even the biggest clan of hyenas is no match for a male lion though.  The King of Jungle always wins!

Lions don’t normally drink a lot of water, but often make chose to live near rivers, streams and waterholes.  This is not because they are thirsty, but because they know prey animals will come to drink sooner or later.  They can lay patiently in wait until dinnertime.  Areas with a lot of water often flood, so lions literally have to jump in at the deep end to catch their food.  Because swimming is such good exercise, these lions are often very large and muscly, just like Olympic swimmers!

What animals do lions eat?

FAQs about what lions eat

A carnivore, meaning “meat eater”, is an organism that derives its energy and nutrient requirements from a diet consisting mainly or exclusively of animal tissue, whether through predation or scavenging.

What kinds of food do lions eat?

Lions are carnivores, which means they are animals that only eat meat. Some of the types of prey they catch include birds, hares, turtles, mice, lizards, wild hogs, wild dogs, antelopes, cheetahs, buffaloes, leopards, crocodiles, baby elephants, rhinoceros, hippopotamuses, and even tall giraffes!

Lions are believed to feed every three or four days, and need on average between 5kg and 7kg of meat a day. But they can go without food for more than a week and then tear into prey, eating up to 50kg of meat at a time – that’s almost a quarter of the animal’s body weight.

What do lions eat first?

The strongest male lion will eat first, followed by other members of the pride. Lionesses will feed themselves first, with cubs getting the scraps. Lions sometimes become the victims of their intended prey.

What do lions eat and why?

The simple answer to the question “What Do Lions Eat” is that they eat flesh and meat. In order to get meat they hunt other animals. Lion is an apex predator which means that it hunts most of the animals that are found in its habitat. This makes it the king of the jungle.

Do lions have predators?

No predators hunt lions to eat them; however, they do have a few natural enemies, such as hyenas and cheetahs. Hyenas compete with lions for food and often try to steal their kills.

Lions are actually omnivores meaning they eat both meat and vegetable material. … For our domestic Lions, grass is often the most readily available plant for them to munch. Second, Lions may eat grass if they have an upset stomach. Eating grass causes irritation to the stomach and will often cause the dog to vomit.

Lions and Hyenas scavenge a great deal from other predators such as the Leopard, Cheetah and Wild Dog. To overcome the stealing of their food by other predators Cheetahs eat very quickly once they have killed in order to prevent scavenging by others.